The presence of meerkats in Blackpool was, once upon a time, confined to those residing at Blackpool Zoo. In recent times, children (and some adults) clutching soft toy meerkats riding on trams has become increasingly common, no doubt boosted by the increased fascination with these cute creatures thanks to an incredibly successful TV advertising campaign, and for a few years a large image of an animal appeared on the side of Balloon car 711 when it advertised the local zoo. Now, the stars of these adverts have themselves paid a visit to Blackpool and one of their new adverts features two trams!

When insurance comparison site ‘Compare the Market’ launched its ‘Compare the Meerkat’ campaign, it is doubtful they could ever have foreseen what a phenomenon the characters involved would become. More recently, the company has sponsored the ITV soap opera Coronation Street and now the famous animated meerkats can be seen before and after each episode of the serial, as well as during the advert breaks. A recent series of short films has seen the meerkats visit Blackpool, and one of the new clips unveiled this week features two trams, representing both modern and heritage fleets. Two of the famous furry animals, Aleksandar Orlov and Bogdan, are seen admiring Open Boat 230 at Pleasure Beach, before Alexsandar is startled by a passing high-speed Flexity tram.

Unfortunately, just like the recent appearance of ‘Princess Alice’ 706 on Coronation Street itself, the sound of a traditional tramcar gong has been dubbed over the footage of 230 which doesn’t actually have a gong fitted! Nonetheless, and despite the clip lasting a mere 11 seconds, this is another nice use of the trams and shows what a key part of the Blackpool scene both classic and modern trams are considered to be. Similar short films show the meerkats visiting the beach, Tower ballroom and the three piers, and are well worth a look for any fans of all things cute and amusing! Although the tram footage hasn’t yet been shown on television, the first of this new series of clips were aired during Monday 21st October’s episode of Coronation Street and the trams are likely to appear in future episodes, possibly later in the week. However, it is already possible to view the meerkats’ adventures in Blackpool – including their tram encounter – at http://www.comparethemarket.com/meerkat/coronation-street/video-archive/ 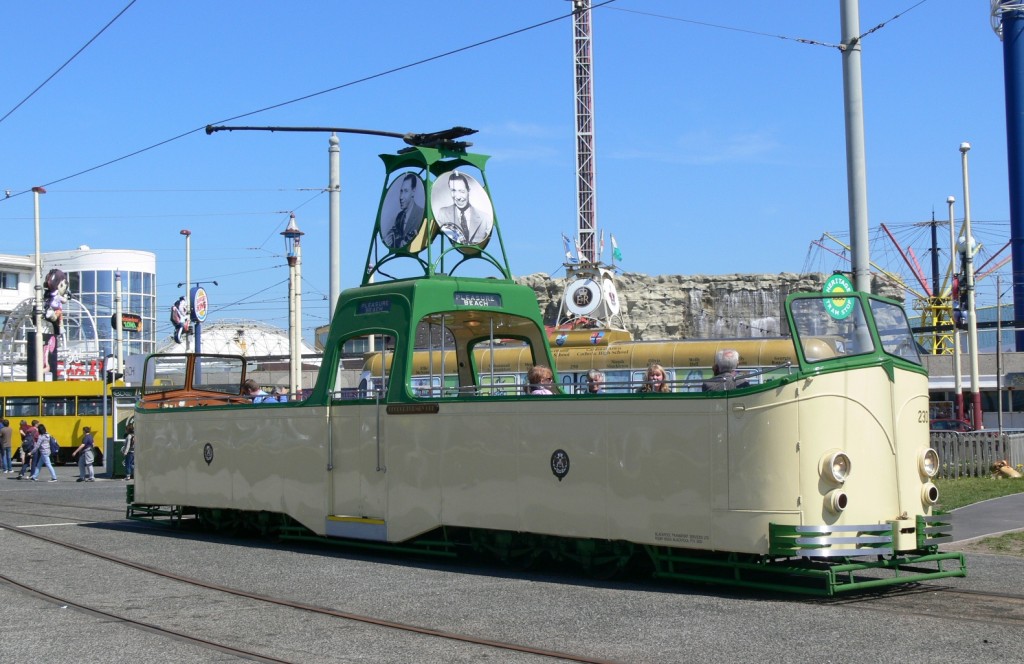 The wonderful Boat 230 - star of the new 'Compare the Meerkat' commercial - seen at Pleasure Beach on a glorious sunny day earlier this year. (Photo by Andrew Waddington)