A number of the trams at Beamish Museum are currently undergoing workshop attention, in order to return them to a serviceable condition. Whilst it is pleasing to see work has finally commenced on Sunderland 16 after this tram had spent over a year out of service, it is unfortunate that two members of the running fleet have also had to be temporarily withdrawn for repair.

Earlier this week, Sunderland 16 was moved to Road 1 in the depot complex, now largely used as a workshop space for the operational tram fleet, with assistance from a large JCB machine. The tram had previously stood over the maintenance pit on Road 3 to enable its lifeguards to be removed, whilst its braking equipment was disconnected. This is to allow the car to be lifted from its truck so that its worn tyres can be replaced, whilst the paintwork is set to receive some remedial attention too. This useful enclosed double-deck tram has been sorely missed whilst out of action, so its return to service will be very much welcomed.

We recently reported that Grimsby & Immingham 26 was off the road with a defective motor, which remains under repair with the museum’s contractor, completion of this job having fallen behind schedule. Unfortunately, Oporto 196 is now also out of service following the discovery of a defective motor bearing on Wednesday 16th October. No time was wasted in removing the rogue motor and dispatching the faulty parts to the same contractor. The cause of this issue is not yet apparent and will require some further investigation, but as 196 only came back into service little more than a year ago following a heavy overhaul which included motor work, this failure is particularly disappointing.

The temporary loss of both 26 and 196 will be felt keenly by the museum as the days grow shorter and colder. Beamish now have just three trams available for use, two of which are open toppers, and this will put added pressure on Blackpool Balloon 703/Sunderland 101, which is of course on long-term loan from the Lancastrian Transport Trust. Hopefully the two single deck cars will both be fully repaired soon, as they will be needed for service in the run up to Christmas, which can be an extremely busy time for the museum and its tramway.

In better news from this museum, Home Farm is set to undergo a transformation to portray a typical British farm during the Second World War. An appeal has been launched to members of the public, asking for objects from the appropriate era to give the redeveloped area added authenticity. This is the first step towards expanding the time period represented at Beamish, with a 1950s town area earmarked for construction in the fairly near future which should see working trolleybuses join the already impressive number of attractions on offer. It is also hoped that this will provide the perfect excuse to expand the home tram fleet with more modern vehicles, possibly including Sheffield 513 which remains the museum’s property but is presently on loan to the East Anglian Transport Museum. 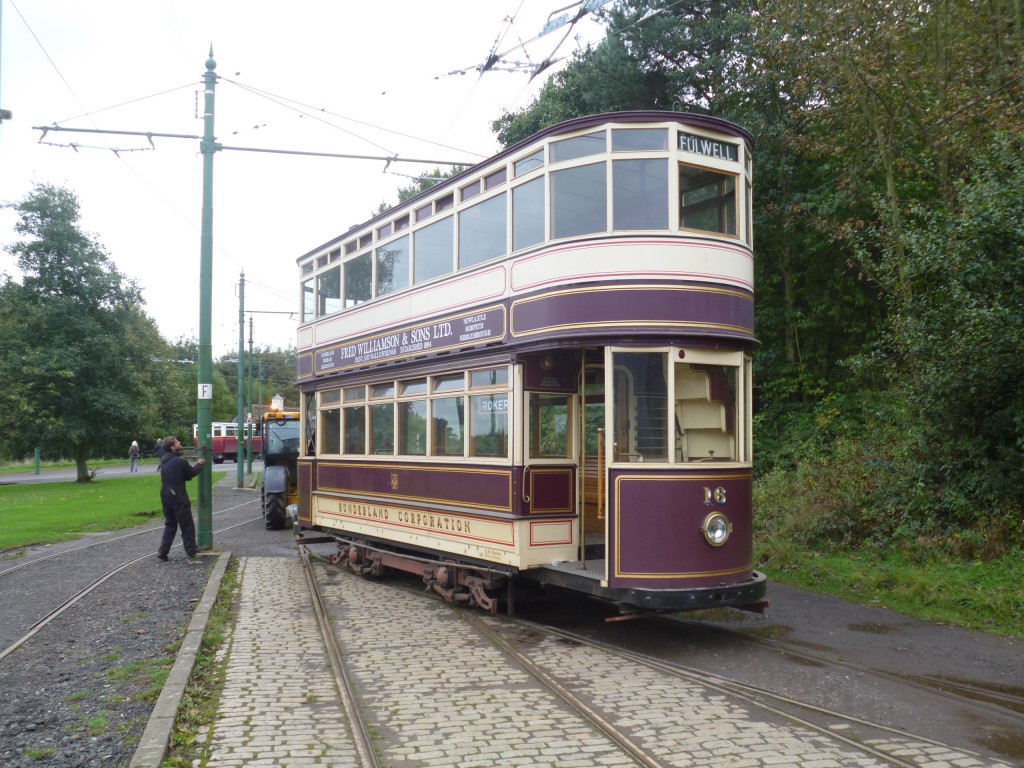 Sunderland 16, minus its lifeguards, is seen being pushed towards Road 1 of the Beamish tram sheds, where it will be lifted to permit its severely worn tyres to be renewed. (Photo courtesy of the Beamish Transport & Industry Blog)

2 Responses to Beamish trams get TLC