Posted on Wednesday 9 October 2013 by Gareth Prior

Manchester Metrolink services are now running in passenger service through to Ashton-under-Lyne following the opening – several months early – of the East Manchester line extension. M5000 3012 had the honour of running the first journeys from Victoria to Ashton-under-Lyne and then back to Bury shortly after 0500 on Wednesday 9th October as the latest piece of the Metrolink jigsaw was put into place.

Shadow running had commenced last Monday (30th September) and after no problems were discovered during this (with the exception of a car managing to drive onto the tracks and causing delays to the service) the go-ahead was given for public services to commence as per the announcement last month. The originally announced plan had been for the 2.1 mile extension to open in winter 2013/14 but Metrolink were able to bring this forward by a few months so that the people of Ashton can now travel on an efficient and modern tram system into Manchester city centre and beyond.

Four new stops have been built on this extension of the East Manchester line from Droylsden. These are at Audenshaw, Ashton Moss, Ashton West and Ashton-under-Lyne with park and ride sites also opened at Ashton Moss (200 spaces) and Ashton West (194 spaces shared with users of the Ashton Moss Leisure Park). Trams from Ashton will all run through to Bury via the city centre for now although when major changes are being made at Victoria early next year they will instead run to Eccles. M5000s are due to operate all services on the line and these will currently be running solo with the exception of some services on Manchester City match days.

It is expected that this will be the last extension to open in 2013 with the next openings likely to be the Oldham and Rochdale town centre lines which are due to open in early 2014. 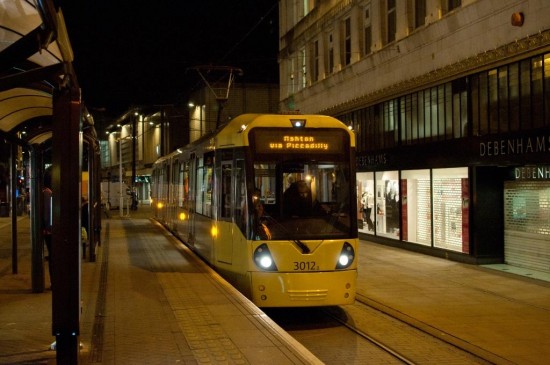 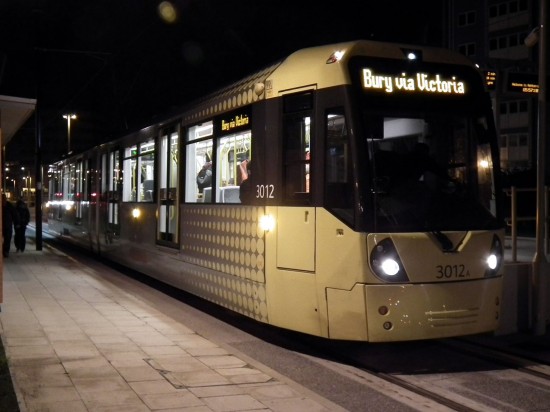 3012 waits at Ashton-under-Lyne just before 0600 on Wednesday 9th October with the first departure from the town to Bury. (Photo: Steve Kemp)

* A full Photo Gallery of images from the opening day will be added to British Trams Online this weekend.

4 Responses to Metrolink arrives in Ashton-under-Lyne