Following the recent exciting news regarding the offer of a substantial amount of the funding required to extend the Blackpool tramway to serve North Station, there has been no shortage of speculation regarding this ambitious project. Naturally the main aim of such a development will be to create a modern public transport link using light rail vehicles; however, the potential implications for the heritage trams that remain in Blackpool could also be huge.

Providing the final cash is secured and the project is given the green light, we could see construction work on the new branch line commence within two years. So, if this all happens, which tram should be given the honour of opening the new line? Clearly this would be a very significant development, as no new extensions of the Blackpool tramway have appeared since the line to Starr Gate was built! Some would say that, as a modern light rail system, it should be one of the Flexity2 trams that is used for an opening ceremony, but the temptation to acknowledge the history of trams running into Blackpool town centre must surely exist.

Your writer’s gut feeling, is that a tram with particular relevance to the North Station itself should be given this particular honour, and two cars stand out as being obvious candidates, although regrettably neither is owned by Blackpool Transport. Blackpool & Fleetwood ‘Rack’ 2, now preserved at the National Tramway Museum, is the sole survivor of a class of tram built to inaugurate the original North Station to Fleetwood route in 1898, making it an obvious candidate to revisit one of its old haunts. Although in the Tramroad era, trams leaving the station would have headed towards Gynn Square before reaching the promenade, rather than heading straight for North Pier as will be the case second time around, the thought of journeying from North Station to Fleetwood Ferry aboard one of the original 1898 crossbench cars is certainly a mouthwatering one! The possibility of a ‘then and now’ photo shoot for the press, featuring ‘Rack’ 2 and Flexity 002, would also be a potentially exciting prospect.

At the other end of the scale, the last tram to the old North Station tram terminus was Brush Railcoach 290, latterly 627. This car is now owned by the Fleetwood Heritage Leisure Trust and is currently on static display close to the Pleasure Beach. If its owners could be persuaded to allow the tram to operate as a special guest then it would certainly give some continuity to the proceedings, although it would probably require significant restoration work to be made fit to run again. Other survivors associated with the old North Station route include Fleetwood ‘Box’ 40 and Blackpool ‘Pantograph’ car 167, the latter representing a type of tram which ran almost exclusively along that route for their entire working lives.

Bearing in mind that a new extension to North Station will bear little resemblance to the previous route, it may be worth looking to a tram which has commonly traversed Talbot Road itself in the distant past. This was once familiar territory for the Standard cars, making either 143 (assuming its restoration is completed by then) or 147 another potential candidate for a starring role.

Whatever the future holds, it is fantastic to see realistic proposals to actually expand a tramway that was facing threats to its continued survival not so many years ago. With ‘Transport for Lancashire’ pledging over £16 million to make this dream into a reality, hopefully we can look forward to seeing trams of some description exit the promenade at Talbot Square, returning with full loads of passengers acquired from terminating trains. Whichever tram may be chosen to perform the all-important first run, that is undoubtedly something to be celebrated! 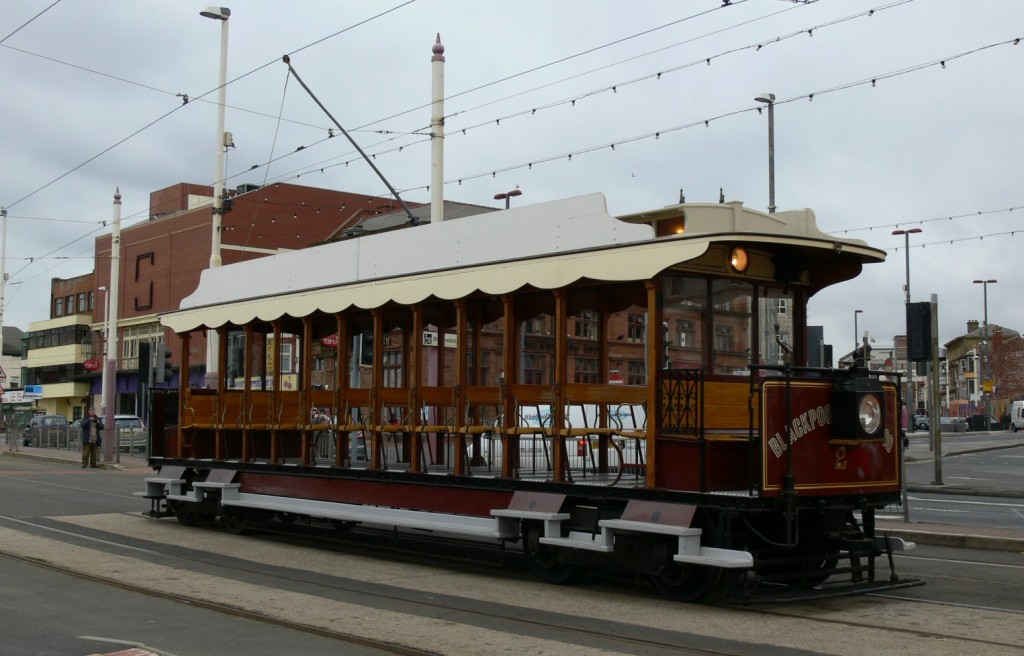 A former stalwart of the original line to North Station; Fleetwood 'Rack' 2 seen at North Pier during its last visit to the town in September 2010. Hopefully in a few years trams will be able to divert from the promenade here to connect with the railway station. (Photo by Andrew Waddington)

This entry was posted in Blackpool Tramway, Opinion. Bookmark the permalink.