Posted on Saturday 31 March 2012 by Gareth Prior

Over the past few weeks enthusiasts have been debating whether Croydon’s Variotrams or Blackpool’s Flexity2s would enter fare paying passenger service first – well now that question has been answered with Variotram 2554 carrying passengers briefly on Friday 30th March. This of course means Croydon “wins” by five days with the first Flexity2 planned to carry passengers on Wednesday 4th April.

2554 left depot shortly after 1500 on Friday 30th March and ran from Therapia Lane to East Croydon, East Croydon to Wimbledon, Wimbledon to East Croydon and then returned to Depot (it is believed it did this out of service). This was the first occurrence of a Variotram carrying passengers in Croydon – fully a month after Transport for London had originally planned for this to happen.

The runs for 2554 immediately followed the Variotrams being approved for operation between Wimbledon and East Croydon – they are currently not permitted to operate any further east although it is hoped this will follow soon. It is believed that a Variotram will also be in use between Wimbledon and East Croydon on Monday 2nd April – but don’t blame us if you travel specifically for one and it doesn’t appear!

It might even be that the next tram to enter passenger service is not a Blackpool Flexity2 with Manchester Metrolink M5000 3025 having recently received the ATS equipment which will enable it to operate on the current network. It is expected to enter service in the next few days. Then on Wednesday 4th April at least six further new trams should enter service in Blackpool when the upgraded tramway finally opens to the public.

With thanks to members of the Croydon Tramlink Yahoo! Group & Graham Feakins for information contained in this article. 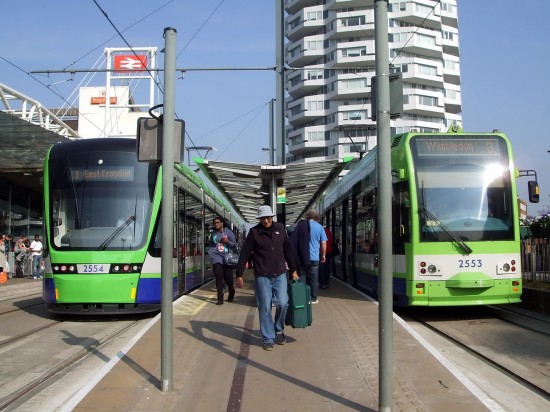 On its first day in passenger service - and with lovely sunshine too! - 2554 is seen on the central platform at East Croydon before it heads back westwards on 30th March 2012. As luck would have it the last of the original Bombardier trams is alongside with 2553 heading to Wimbledon. (Photo: Michael Steward) 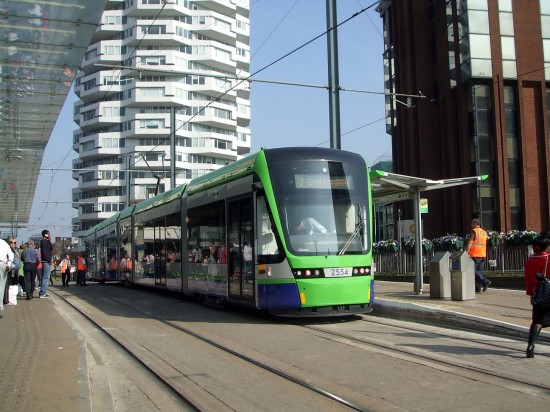