August Bank Holiday Monday, 26th August, was the final day of daytime heritage tram operation in Blackpool for the 2013 season, and the grand finale turned out to be another fantastic day of tram action, blessed by the glorious weather which has been present for many of the heritage tram running days this year. With a total of seven different historic cars carrying passengers during the course of the day, there was certainly no shortage of interest!

The day commenced with four popular trams in service – Fleetwood ‘Box’ 40, Bolton 66, Standard 147 and Boat 602 – the latter now renumbered 227 and making its second appearance in its new red and cream livery. This was also many people’s first chance to see Bolton 66 since its long-running ‘Acdo’ adverts were removed, and since its last outing the yellow lining has been restored along all of the upper deck side panels. Mid-afternoon there was also an opportunity to see Twin set 675+685 which was displayed on Blundell Street for a few hours as a static exhibit.

However, there was plenty of change in store as the various trams returned to depot as their crews needed a break, with only the Boat staying out all day. 147 was first to run in and, thanks to the glorious weather it was replaced by a second Boat car, with 230 being the chosen one. The two Boats spent much of the afternoon in the lucrative Pleasure Beach to North Pier section, with barely a seat to be had on either and many day trippers and holidaymakers joining the regulars for a spot of boating! Due to faults with two trams which were scheduled to operate in the afternoon, substitutes were provided in the shape of Centenary car 642 which was out briefly, and ‘Princess Alice’ 706 which performed the final tour to Fleetwood following 227 to the northern terminus, bringing the curtain down on a highly enjoyable weekend-long event.

It would be fair to say that the future of heritage tram operation in Blackpool was far from secure after the lukewarm response to the initial tour programme offered in 2012, but 2013 has been a phenomenal success and the heritage weekends have now become so successful that finding a seat for the Fleetwood journeys is very hard indeed! Bryan Lindop and his team deserve to be applauded for creating such a winning formula, and these efforts should ensure that we can enjoy riding on traditional tramcars along the Blackpool system for many, many years to come. 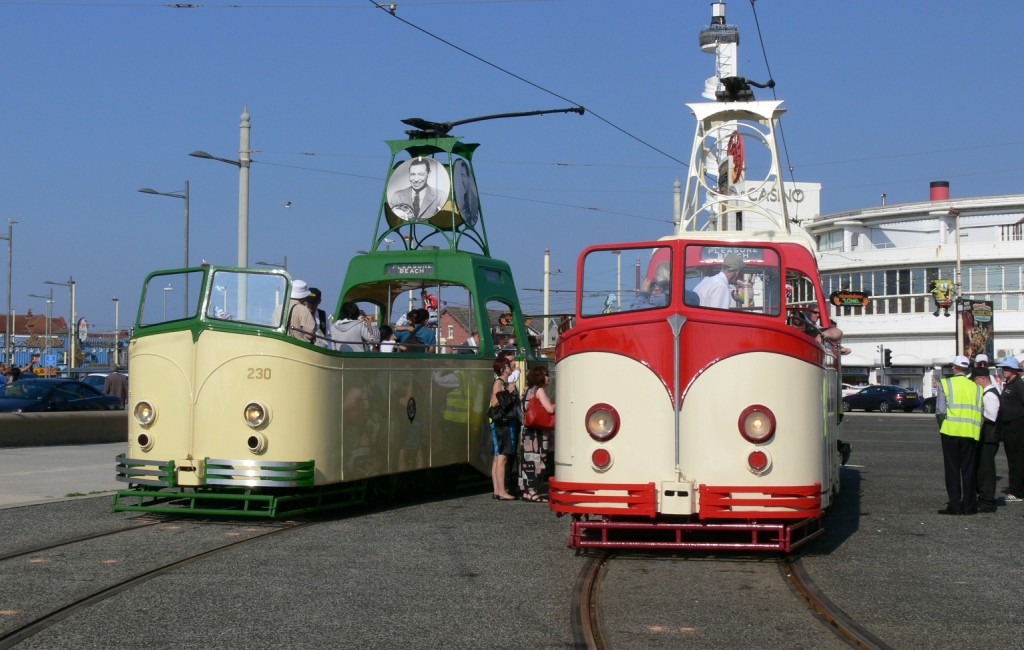 Possibly THE image of the latest Bank Holiday weekend in Blackpool, with Boats 230 and 227 basking in the sun at Pleasure Beach, showing off their contrasting colour schemes. (Photo by Andrew Waddington)