The fourth and final long Bank Holiday weekend ‘heritage’ tram operation in Blackpool got underway on Saturday 24th August, with a varied selection of trams appearing in service over the course of the weekend. However, thanks in no small part to some glorious weather, it was the Boats that stole the show, with car 602 in particular gaining much admiration following a recent repaint.

Saturday 24th August saw Centenary cars 642 and 648 both in service; the first time that two members of this class had been used simultaneously since November 2011. Joining them were Open Boat 230 and Brush car 631, and during the day all four trams managed a run to Fleetwood. Although never that popular when on front line service, the change in status for the Centenary cars was emphasised when 648 left people behind on its first run to Fleetwood! Later in the day, 642 joined 230 for the third and final heritage tour to the Ferry and incredibly, both trams were carrying full capacity loads.

Sunday 25th August was billed as the ‘Boat Bonanza’ and it certainly didn’t disappoint, with all three Boat cars still in Blackpool in use as well as ‘Princess Alice’ 706. This included Boat 602 which had not operated since the end of the 2010 season, and has recently been transformed with a stunning coat of red and cream paint. The tram has also regained its original fleet number of 227, which it carries above the centre doors on the roof canopy. Despite some minor issues with its lights which required a fitter’s attention early on, 602 managed to complete a full day in service, concluding with a run to Fleetwood in tandem with sister car 600.

It is anticipated that 227/602 will be out again on the Bank Holiday Monday, 26th August along with various other historic trams such as Bolton 66, Centenary car 648 and Twin set 272+T2, bringing the curtain down on a highly successful year of daytime heritage tram operation. However, there should be some further opportunities to ride on at least some of these cars as illumination tours resume on Sunday 1st September and should see members of the heritage fleet supporting the trio of feature cars as required. 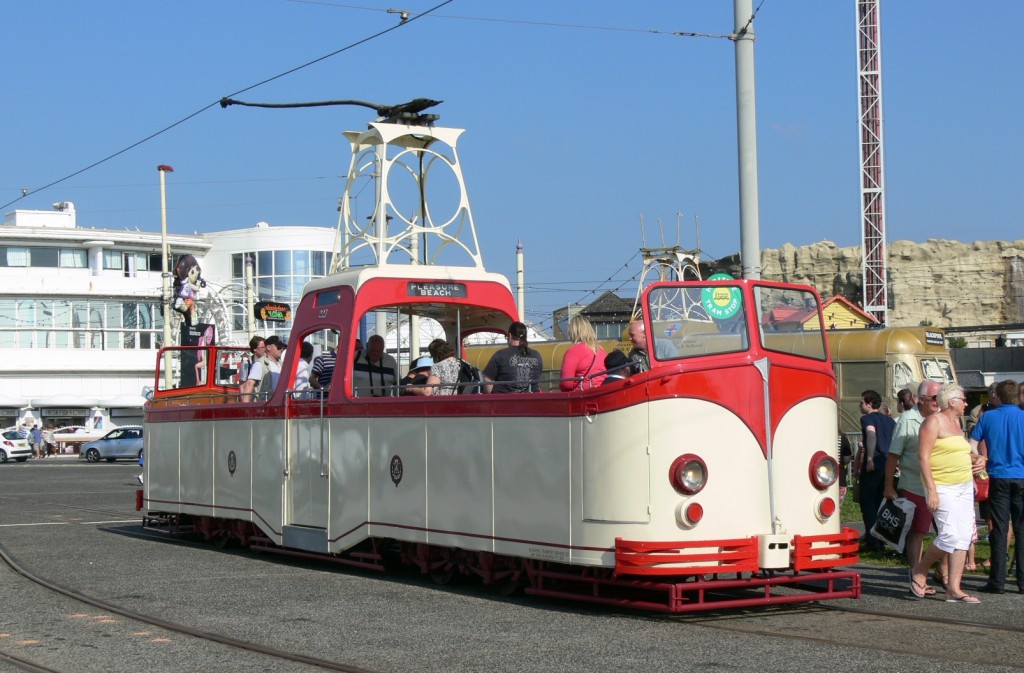 The stunning Boat car 602 - sorry, 227 - in all its glory at Pleasure Beach during its first weekend back in service following its repaint into cream and red. (Photo by Andrew Waddington)