Posted on Thursday 22 August 2013 by Gareth Prior

You may remember back in December we reported on an Aberdeen tram body which had been discovered in use as a house – the only remaining tram in Aberdeen. At the time it was hoped that a band of enthusiasts would be able to rescue the body and start restoring the tram to something like its former glory. In the intervening months the group have had to overcome many hurdles but on Thursday 22nd August they overcame the last of these as the tram was removed from its resting place for a new life in preservation.

The tram – its exact identity is not known at the moment but it is possibly one of six – is from the batch of 1901 double deckers and was one of the first electric trams of Aberdeen Corporation Transport. Like so many other trams following withdrawal it was purchased and converted into living accommodation and it eventually found its way to being part of a house at Cedar Cottage, Wellington Road, Aberdeen where it had remained until now.

On Thursday 22nd August the tram body was cleaned and prepared for removal by the dedicated band of enthusiasts and was then separated from the rest of the building. Then with the help of Jacks Crane Company and M.G.S. Haulage who supplied a low loader the body was craned off the site it had occupied since 1930. The lift entailed the use of a large 50 ton crane although the tram in its present state weighs only 4/5 tons. The main sticking point here was that it had to be lifted over electricity wires but these were isolated as a precaution and the tram was safely removed from its home of 83 years. It was then onto the low loader and off into its new life in preservation. 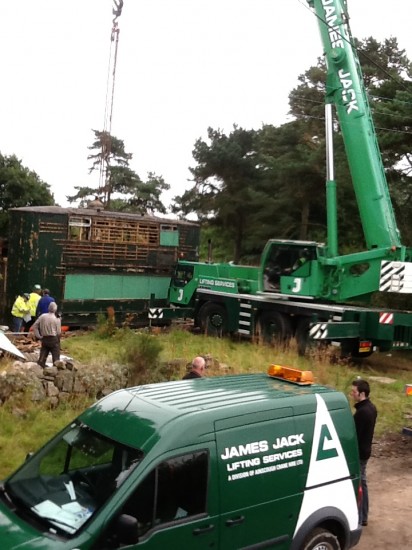 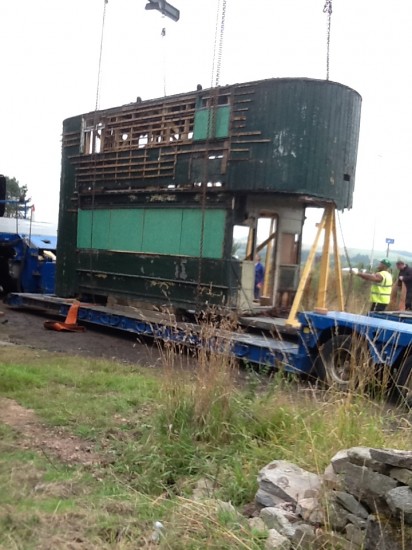 Images showing the tram body being removed from its resting place since 1930, onto the low loader and into its new life in preservation. (Photos: William Brown)