The UKTram Heritage Group now has a new Chairman with Geoffrey Claydon retiring from the role having been in position since the group’s inception. Mr Claydon has been a tireless campaigner for tram preservation and his work for the group followed a distinguished career that saw him play a key role in shaping modern light rail networks.

James Hammett, UKTram Managing Director, said: “Over many years, Geoffrey has made a massive contribution to the sector, and his experience, expertise and enthusiasm will be greatly missed by all who have worked alongside him. In 2020 he celebrated his 90th birthday, and we would like to wish him all the very best as he finally enjoys a well-earned, full retirement! On his retirement from the Heritage Group, we would all like to express our appreciation for his work over many, many years. We certainly owe him a huge debt of gratitude.”

For almost five decades he considered himself an enthusiastic amateur in the rail world whilst pursuing a career as a lawyer in the civil service. But in 1990, when he was originally planning to retire, he was able to combine his professional and personal interests and accepted an offer to take on a five-year project to bring railway and tramway legislation up to date.

Mr Claydon officially retired from the group recently at a meeting held at Beamish. At the same meeting Mike Crabtree (from the Crich Tramway Village) was elected as new Chairman with Ian Longworth (Isle of Man Railways) named as new Vice Chairman. 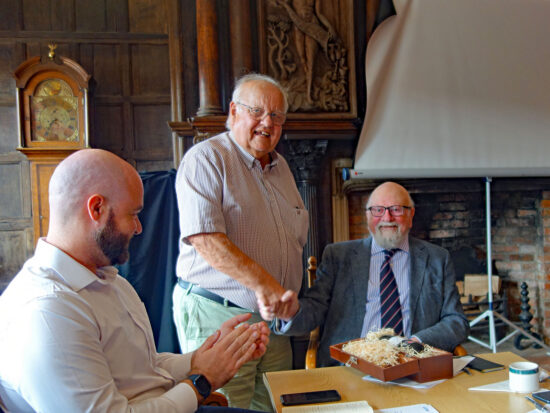 Geoffrey Claydon (seated, right) is presented with retirement gifts by Mike Crabtree and other members of the UKTram Heritage Group. (Photograph courtesy of UKTram)

This entry was posted in UKTram. Bookmark the permalink.