In Pictures: More progress for Trams to Newhaven

Posted on Tuesday 19 April 2022 by Gareth Prior

With trams set to be running in passenger service to Newhaven in a little over a year, the route along Leith Walk and through to Newhaven via Ocean Terminal remains a hive of activity to get things ready for testing. Work is continuing at various sites with preparation works, track laying and platform construction all being seen. According to everything publicly said the line remains both within budget and on time. John Hampton brings us this latest update.

The platforms of the Foot of the Walk tramstop are largely completed. Unlike the other stops from Picardy Place this is not an island platform but incorporates the pavement on each side of the track as part of the platform. The clocktower, in the distance, is on the former North British Railway Leith Central Station which had 4 platforms at first floor level but was closed to passengers in 1952. Post-grouping it was part of the LNER. 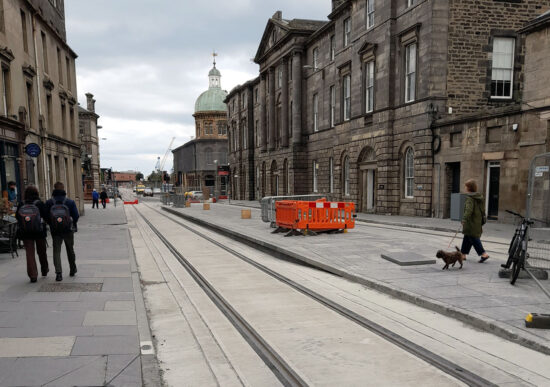 The Shore tramstop is complete except for the installation of the platform furniture and is already being made use of by the locals for parking their bikes and dog walking! The green copper dome is part of the former Leith Corn Exchange. 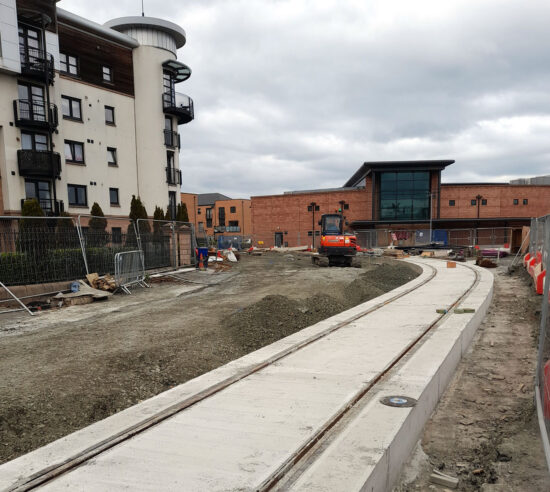 The outbound curve of track is now in place linking the track in Ocean Way to that in Ocean Drive with the Port of Leith tramstop (construction not yet started) just round the corner to the left. Work on the inbound track link is yet to begin. (All Photographs by John Hampton, 17th April 2022)