Posted on Monday 28 February 2022 by Gareth Prior

Today we return to a location we have featured before – the former Brighton Corporation Tramway Depot on Lewes Road – and take an alternative view at the structure, which remains in use as a bus depot to this day.

Now operated by Brighton and Hove – a bus company owned by Go-Ahead – the depot is one of three the company owns. It was opened on 25th November 1901 with trams remaining in situ until 31st August 1939. Following that it housed trolleybuses and buses before the trolleybuses also moved out in 1960 after the abandonment of that system. Since then the depot has just been the home of a fleet of buses but still 120 years after it was originally built it is in public transport use. 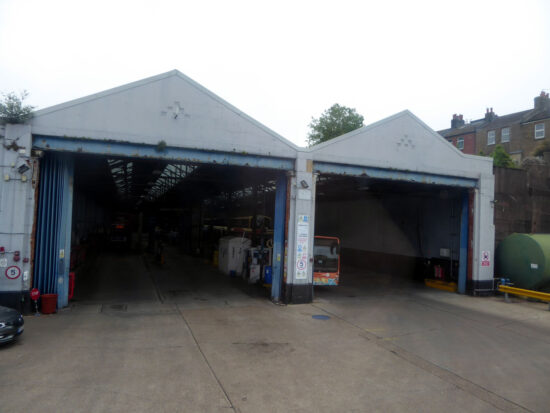 Taken from the top deck of a bus, this view shows the inside of the all old tram shed – and current bus depot during a special tour of old Brighton trolleybus routes. (Photograph by Tony Sullivan, 4th July 2021)