Posted on Friday 14 January 2022 by Gareth Prior

We make a return to Blackpool in 2010 as “Picture in Time” continues.

2010 was the year that the Blackpool Tramway celebrated its 125th anniversary with a week of special events taking place around the actual anniversary day of 29th September. But while there were visitors to the tramway to help the celebrations a normal service was also running, although it would be fair to say the tramway wasn’t looking its best at this time with a service only able to operate between Pleasure Beach and Fisherman’s Walk in Fleetwood due to the upgrade works at either end of the line.

The closure of the line south of Pleasure Beach meant that the southbound running line from there was unused for services but was, at times, utilised for the storage of trams between duties. And so it was on 28th September 2010 when two Centenary Cars were being stabled at the time of this photo. In front is 644 with its half advert for Farmer Parr’s Animal World and it is joined by 643 which is in a plain black and white livery with added Metro Coastlines logos after the removal of an advert for G Casino the previous year. 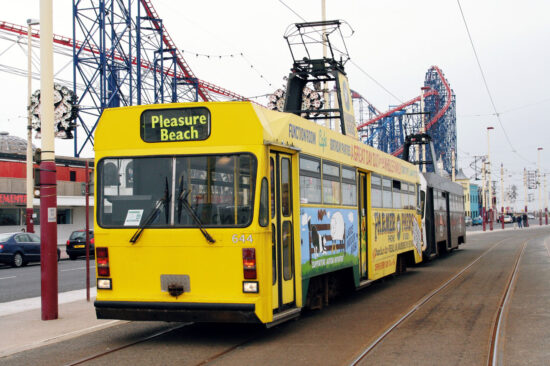