Around the World in Trams: Melbourne 671

Posted on Saturday 13 November 2021 by Gareth Prior

Its not just trams which used to run on the Ballarat tram system which feature at the museum as shown in today’s image which is one of the ubiquitous Melbourne W class of trams.

671 was built in 1934 and entered service as a W4 class tram on the Melbourne tram system. It remained in service for nearly 35 years, being withdrawn in 1968. It remained in store until 1975 when it was acquired by the Ballarat Tram Preservation Society. 1980 saw it enter service at Ballarat and since then it has been an operational example in the fleet including a period back on the Melbourne City Circle route.

Here we see 671 sitting outside the depot in an advertising livery (applied in 2009) for a lakeside restaurant. At this time 671 was out of service as it was damaged by a motor vehicle while bedecked as a floral tram in the Ballarat Begonia Festival. The motorist’s insurance forked out AD250,000 for the repairs to the body and underframe. 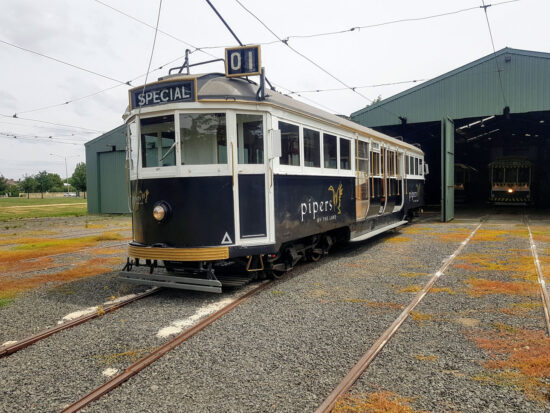