Posted on Monday 8 November 2021 by Gareth Prior

“Trams &” is again having a Sheffield theme for this latest edition of the series showing a tram and another vehicle as its another trip to Crich’s “Best of Sheffield” event in May 2014.

This photo takes us into the depot yard at Crich where non-operational Sheffield tram 189 had been dragged out of the depots to be displayed on the fan. As an added attraction several of the other visiting Sheffield vehicles made appearances in the depot yard allowing for some unique shots such as this one.

189 is seen closest to the camera and is joined by one of the modern First Sheffield buses which had received heritage liveries in 2013 to mark the centenary of the first motor bus services in the city. This is a Wright Gemini bus which received the traditional Sheffield colours of cream and blue along with a traditional looking fleet number of 1 on the front of the vehicle. It was also lettered for Sheffield Corporation Tramways. 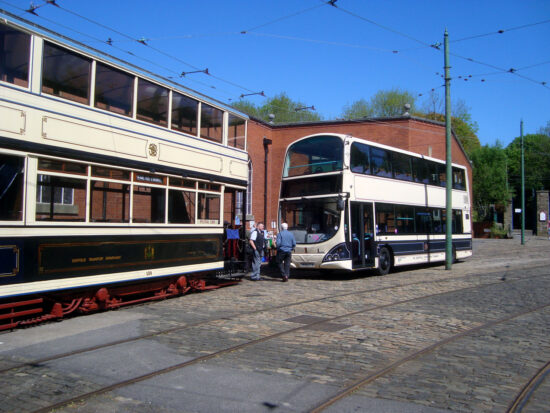