Posted on Monday 18 October 2021 by Gareth Prior

After the latest series of “Whatever Happened To?” finished last week, our Monday evening photo series for the next few weeks with the return of  “Trams &” with the first part featuring a modern tram and bus in Sheffield.

Obviously on this website we are pro-tram but also believe that a tram system in isolation is no good to the travelling public. That means it should be part of an integrated transport network which, although not always possible with the way transport is organised in much of the country, does happen in places, none more so than in Sheffield where there is a dedicated Supertramlink bus service which runs from Middlewood to Stocksbridge. And it is a bus on that route which we see on the far side of this image as Stagecoach operated Alexander Dennis Enviro200, reg no. YN11 FFB, waits for departure.

Closer to the camera is a more familiar sight on these pages, Stagecoach Supertram 121 which stands at Middlewood terminus also waiting to depart for its next journey, in this case to Meadowhall. 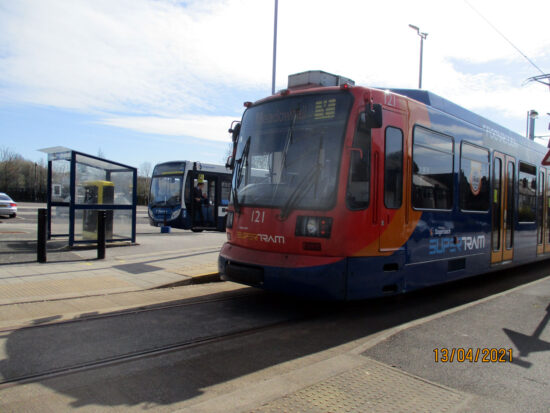