Posted on Friday 3 September 2021 by Gareth Prior

There has been another new advert applied to a tram in Edinburgh with 267 receiving vinyls for the new Johnnie Walker whisky visitor attraction on Princes Street which is due to open to the public from Monday 6th September. This is the first advert carried by 267 since December 2019.

You know how the adverts are in Edinburgh by now and 267’s new design is no different! Full height adverts on the third and fifth sections of the tram with the remaining four sections just having the adverts above the windows. The background colours of this advert are gold (on three of the above window ads) and blue (on the other sections, including the full height ones).

The new Johnnie Walker visitor centre is in the old House of Fraser store at the west end of Princes Street. The building has been extensively renovated and was opened to the press on Thursday 2nd September with public opening coming on Monday 6th September.

As mentioned in the intro this is the first advert for 267 since it lost its design for Spotify in December 2019 and since then it has been running in standard fleet colours. In total the tram has now received four adverts with CR Smith advertising from September 2017 to June 2019, EE 5G from June 2019 to August 2019 and Spotify between August and December 2019.

267 at Bankhead in its new advert as it makes it way towards the Airport. 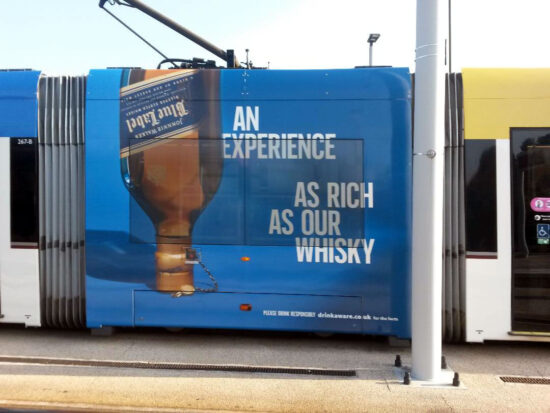 One of the full height adverts of the tram with the slogan “An Experience as rich as our whisky”. 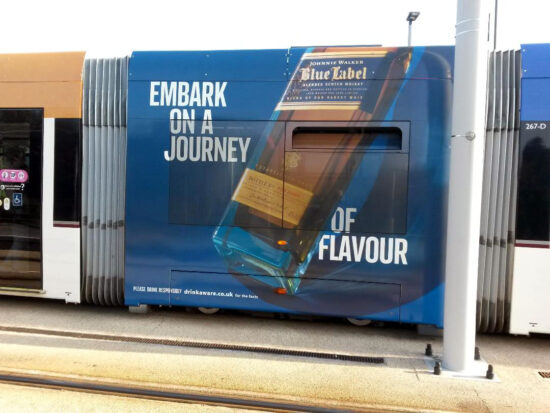 The other full height section asking you to embark on a journey of flavour. (All Photographs by John Hampton, 2nd September 2021)