Posted on Wednesday 21 April 2021 by Gareth Prior

In this latest pictorial look at progress on the construction of the Trams to Newhaven project in Edinburgh we head to the end of the line at the aforementioned Newhaven where more work is taking place. Roy Calderwood took the trip.

The end of the line at Newhaven on Lindsay Road will not only see the tram terminus constructed but will also provide a stabling location for trams along with driver welfare facilities. This will ensure that it isn’t necessary for late night trams once arriving at Newhaven to head all the way back to the depot at nearly the other end of the line and also allow for early morning departures from Newhaven to operate. Not originally part of the plans they were added later and will also see some public realm improvements as well. 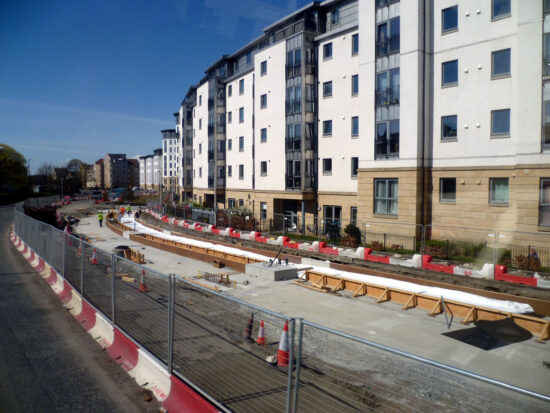 This photo is looking west towards the stabling area which is then followed by a public space before the junction with Sandpiper Drive. The western end of the tramstop will be in the right foreground. Lindsay Road, where this picture is taken from (on board a bus), is only one way westbound at the moment with eastbound traffic using an alternative route behind the flats. The flats are all built on land reclaimed from the Forth following the construction of the Western Breakwater at the start of World War II. Newhaven Harbour is out of sight beyond the furthest flats in the distance. It was September 1956 when trams last ran here but in 2023 that should all change! (Photograph by Roy Calderwood, 15th April 2021)