Posted on Tuesday 30 March 2021 by Gareth Prior

In this edition of “Picture in Time” we are again off to the Tyne and Wear Metro with a view of prototype Metrocar 4001.

We’ve recently been into the history of 4001 when we took a look at the unit during testing and by the time of this photo in 1988 it had been in the northeast for 13 years with the network actually opening to passengers at the start of the 1980s. Still in the original Yellow and White livery the below photo shows 4001 working empty into the old British Rail station at Jesmond on Sunday 3rd April 1988 to form the 0930 “Tip-Toe” charity special which covered a couple of sidings and a run through South Gosforth Depot and involved non-stop running.

The line that 4001 is running on here is the old BR line into Newcastle Central and which these days is solely reserved for empty stock movements to and from St James/Manors with Metro services diverted to a new Metro underground Jesmond station as the line tunnels under the centre of Newcastle City Centre.

The charity special ran fast to Benton to access the spur that in the early days of the Metro was used for terminating the short Benton (Red line) trains and in BR days provided access to the East Coast Mainline. This short stretch of line has long since been lifted. Following this the trip made a non-stop run to Regent Centre via the through line beside Gosforth Depot to access the siding which is used to reverse terminating trains followed by a non-stop run back to the old Jesmond station. 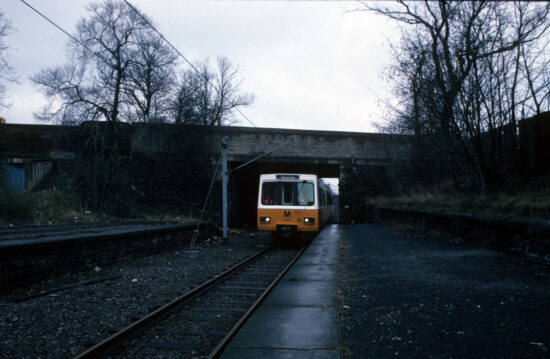