We start another new series today as we feature trams in places you wouldn’t usually expect to find them! We all know the usual places where you will find trams, whether that be an operating system or a regular museum but occasionally over the years a tram has turned up on display somewhere out of the ordinary and this series seeks to celebrate those occasions. We start off with a tram still on the back of a low loader for a very short visit away from its home at Crich.

Southampton 45 is a tram which doesn’t really need any introduction having been the tram which in effect started the UK tramcar preservation movement when it was purchased by members of the then Light Rail Transport League Museum Committee in 1948 after a farewell tour on the Southampton system. After spells of storage in both Leeds and Blackpool and then a period on display at Beaulieu back in its home county of Hampshire it arrived at Crich during 1960 and has remained there ever since, well at least for most of the time.

A rare trip away came in June 2013 when it spent a single day at Kimberley to help to celebrate the Centenary of the “Ripley Rattlers” tram system. This operated between Ripley and Nottingham (going via Eastwood, Heanor and Condor) with a mostly single track route with a huge 316 passing loops. It was said to be a long and bumpy journey and was known as the Ripley Rattlers as a result. The route ran between 1913 and 1933 and with Southampton 45 looking similar to the trams which once operated the service it was chosen to help commemorate this significant anniversary. 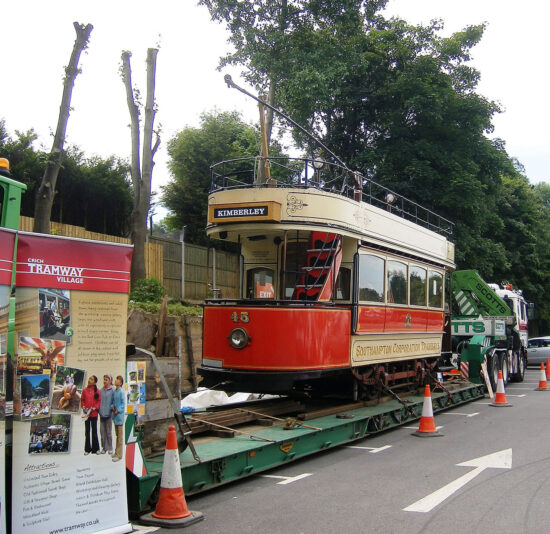 Southampton 45 is seen in the Sainsbury’s car park in Kimberley (we’re pretty sure that’s a pretty unusual place for a tram!) on 29th June 2013. This was a one day visit only and the tram didn’t ever leave the low loader but provided some publicity for the Crich Tramway Village as well as celebrating the Centenary. Note the special Kimberley sticker on the destination blind. (Photograph by Hazel Quarmby)

This entry was posted in Crich Tramway Village, Trams in Unusual Places. Bookmark the permalink.

1 Response to Trams in Unusual Places: Southampton 45 in Kimberley