From this week “Stop by Stop” heads north to the Blackpool Tramway as for the next few weeks we take a look at the modern light rail stops of the tramway. As with Nottingham Express Transit, we have split the line between Starr Gate and Fleetwood Ferry into different sections and there will be three sections featuring the light rail stops and then a further one looking at today’s heritage stops. The first part of the series will show the stops between Starr Gate and North Pier and we will only be featuring the stops as they have been since the upgraded tramway opened, so even though in most cases there has been a tramstop there for many years we will only be looking back to 2012 when the first trams ran on the modernised tramway. In this first edition we will start at the beginning , which is Starr Gate.

For the purposes of this series all the tramstops – with the exception of one, more on that in the second section of this series! –  first opened on 4th April 2012 when the newly upgraded tramway started service with trams running from Starr Gate in south Blackpool north to Fleetwood Ferry. A new tram depot was built at the southern terminus of Starr Gate and that building dominates the scene as we take a look at the first tramstop. Provided with two platforms usually one is used for offloading with all services departing from the northbound platform (although at times of track maintenance it has been known for the terminating platform to be used for outbound services as well). The stops are located adjacent to the depot and after terminating from the north they pull forward onto the line leading to the depot entrance before reversing and returning to the northbound stop. When entering service trams leave the depot at the north entrance and have to run into the stop from the north and then perform the reversing manoeuvre mentioned above. The northbound platform consists of a shelter plus information panels with the southbound stop just having an information panel. With all tickets having to pre purchased through the Blackpool Transport app (or website) or on board the tram no stop has any ticket buying facilities. 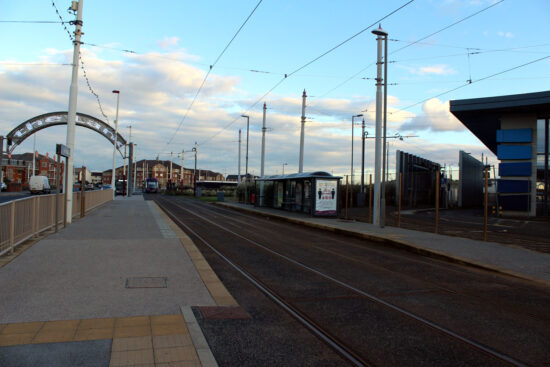 This is the Starr Gate stop as seen on 25th September 2020. The tram in the distance has just terminated at the stop and moved forward to the single line section leading to the depot. It will shortly reverse and pull into the northbound platform on the right. Further to the right is the tram depot with the tram wash also seen. 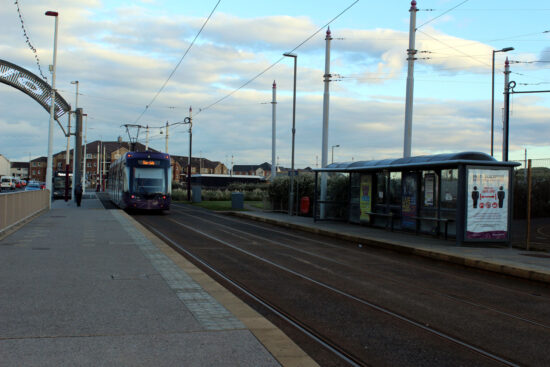 In this view we see 011 just leaving the terminating platform and moving forward to reverse and return north. This image was captured on 25th September 2020. 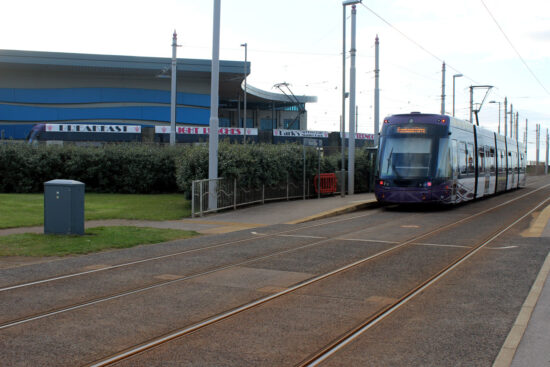 Looking north we see 015 at the northbound departure stop with the depot on the left. We also see 010 stabled in the depot yard. In order to access the shed of the depot this tram will have to pull forward to the entrance and then reverse back in. (All Photographs by Gareth Prior)