Around the World in Trams: Berlin 2003

Posted on Saturday 21 November 2020 by Gareth Prior

We move on this week to Germany and Berlin where for the next few weeks we will be taking a look at the trams running over several years between 2016 and 2019.

Berlin has an extensive tram network and can trace back its origins all the way to 1865. Today it is the third largest tram system in the world (only beaten by Melbourne and St Petersburg) with 190km of route length (that’s 120 miles if you prefer) with the actual line length being 430km (270m). Standard gauge with 22 separate routes and nearly 800 stops it is an extensive network which gives plenty to keep the tram enthusiast busy!

In this view we see 2003 at Mitte Am Kupfergraben in the historic heart of Berlin, about to set off northbound on route M1 for Niederschonh/Schillerstrasse. The prefix M indicates this is a “metro-tram” route with 24 hour running. Built by Adtranz in 2000 this tram was refurbished during 2016 and renumbered 2203. This view was taken before that refurbishment on 6th February 2016. 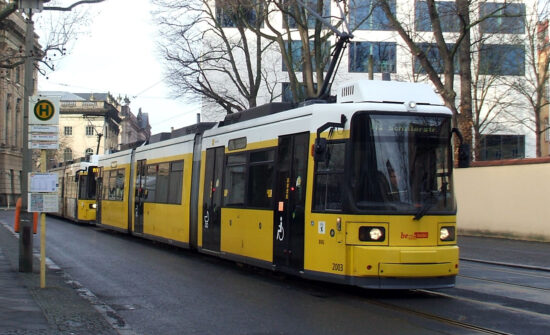