Posted on Wednesday 14 October 2020 by Gareth Prior

The modern trams edition of “Picture in Time” this time moves on to the Docklands Light Railway as we head back to look as some archive images from this network.

The below photo shows two of the B2K class of trains pausing at Lewisham on 4th November 2003. In front – actually at the rear as this is the buffer end of the station – we see 02 and on this day it was paired with consecutively numbered 03 which will lead the pair off to Stratford when it departs shortly. Both these trains are in the earlier red, blue and white livery including the white doors. This class of train had only been introduced into service two years earlier in 2001 with construction having been completed by Bombardier Transportation in Belgium to a similar style to all previous trains which had run on the DLR. 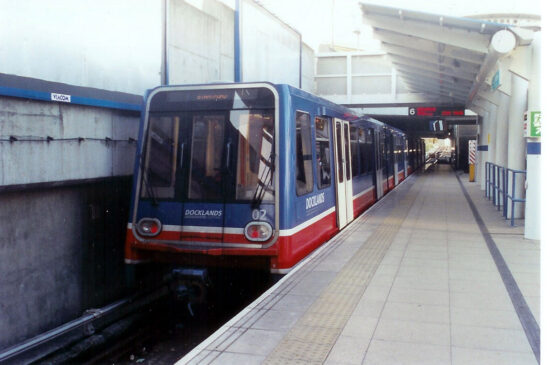