Posted on Tuesday 29 September 2020 by Gareth Prior

Blackpool’s Illuminated Frigate, HMS Blackpool, numbered 736 in the fleet has returned to service after a protracted overhaul was completed allowing it to enter service again on Saturday 26th September. The work on the tram has been concentrated on its lighting which because of the harsh coastal environment it has to work in had seen many of the bulb holders suffer damage which meant it wasn’t as easy as just putting a new bulb in.

The Frigate had been withdrawn from service at the end of last year’s illuminations and the plan then was to complete the work in plenty of time for the 2020 illuminations. Then the Coronavirus pandemic hit and workshop staff at Rigby Road were furloughed delaying the project (as well as similar but more extensive work on the Western Train).

This meant that the 2020 illuminations started at the beginning at September with no illuminated feature cars available (the Trawler was not used at this time either) and the Balloon Car filling in to perform the socially distanced nightly illuminated tours but it was announced that the Frigate would be relaunched during the 135th Anniversary weekend with the work having been completed.

Before it would run its first Illumination Tours though it would be used on daytime heritage tours on Saturday 26th September with both a Coastal (Fleetwood) Tour and a Promenade (Little Bispham) tour on the agenda for the newly refreshed Frigate. With a mainly fine day the fact that it had bright new illuminations didn’t matter but that was for a few hours later to see the full effect!

After daytime tours, 736 returned to depot before coming back out again for the evening and its first illuminated tours of 2020. It ran two tours on that first night (the third and sixth of the evening) and ended up being the first fully illuminated tram to run during the 2020 illuminations. It should have been the second as the Trawler was also out on tour duty on that night (its first use of 2020 too) but unfortunately as it left depot its problematic external illuminations failed (save for a limited few lights). With passengers already booked on the tours that the Trawler was due to run it was decided to keep it in service and it ended up running two tours sans illuminations.

The Frigate is now expected to see regular use for the remainder of the illuminations which for 2020 are due to continue shining nightly until 3rd January 2021.

The Western Train remains in the workshops undergoing its own overhaul and while work is progressing it isn’t ready for a return just yet. We’re keep you informed when it too is ready to return.

In these Covid times all illumination tours have to be pre-booked with limited capacity available on each tram. In order to book your place visit the Blackpool Heritage Tram Tours website at https://blackpoolheritage.com/illuminations-tours/ where more details are provided including the various procedures in place to keep passengers and crews safe. All trams are running at significantly reduced capacity allowing full social distancing to be practiced and with regular cleaning and face coverings there should be no concerns about your safety on-board if you choose to visit Blackpool for an illumination tour. (Please note although government advice has changed to essential travel only on board public transport in Blackpool – and other parts of the northwest – Heritage Tram Tours are considered a leisure attraction and is not affected by this change). 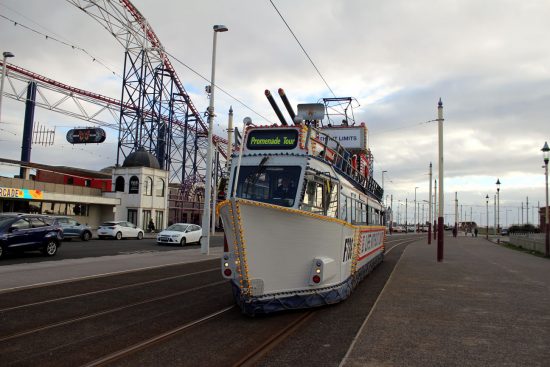 A daytime view of the Frigate on 26th September as it works a heritage Promenade Tour at Pleasure Beach. The lights are on but you can’t really tell as there is still plenty of natural light. 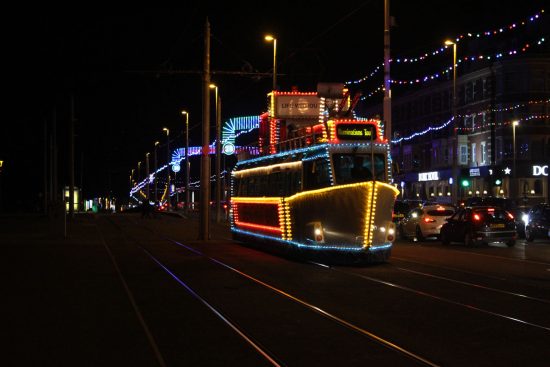 It’s first Illumination Tour back as it heads south at Cabin, also on 26th September. 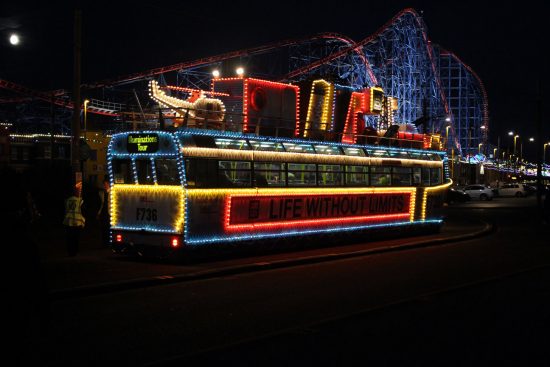 Another look at 736 as it stands on Pleasure Beach loop. The date is 27th September. (All Photographs by Gareth Prior)