In Pictures: More history discovered in Edinburgh as Trams to Newhaven project continues

Posted on Thursday 17 September 2020 by Gareth Prior

One of the fascinating aspects of the current stage of the Trams to Newhaven project in Edinburgh is the archaeological finds which have long laid buried under the streets of the city. This is certainly the case around the South Leith Parish Church where a skeleton has recently been unearthed as the team from GUARD Archaeology continue their work (please note this article contains images of the recent findings including the skeleton).

The archaeologists are currently taking great care to find out as much as they can about what life may have been like in Leith in previous eras and the skeleton will be one of many ways they can do this – including how did they die and what was their diet like. Before the skeleton can be removed elsewhere it is a careful task to make sure that nothing is missed. It is thought that these bones may date from the 15th or 16th century and has been found under the road on Constitution Street in the area that used to be part of the burial ground at the 1483 built South Leith Parish Church.

Other recent findings have included stones and wooden structure but at the present time the archaeologists aren’t sure what the purpose of these were – but then finding out is surely a lot of the fun!

In other – probably less exciting! – construction news work is still ongoing along the route of the tramway with Leith Walk seeing site investigation, excavation works and surface water drainage installation. As was probably always going to happen the utility diversion works at the junction of McDonald Road/Leith Walk has discovered that the documents they were using which apparently showed all utilities which would need moving didn’t actually record everything. As a result additional electrical utility works are now needed and will be taking place over the next few weeks. 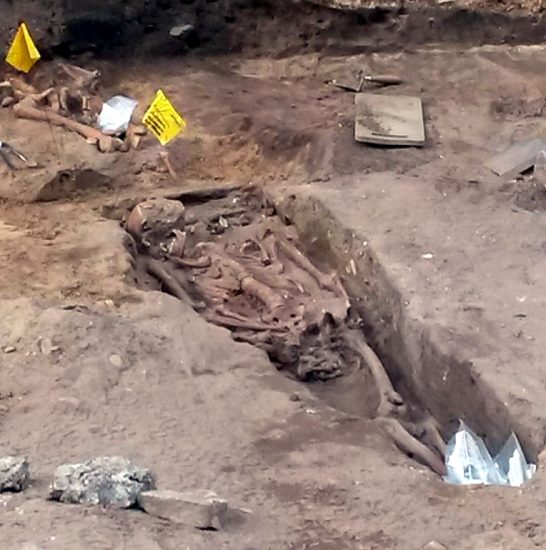 Probably dating from the 15th or 16th century this skeleton has recently been discovered under Constitution Street. What secrets of the past may he or she reveal of the history of Leith? 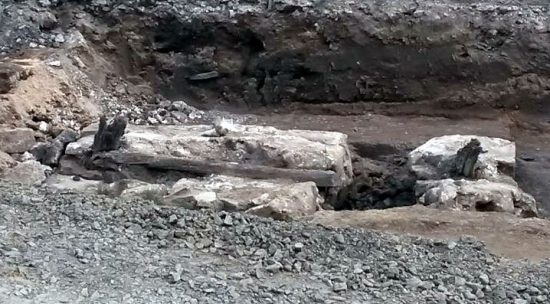 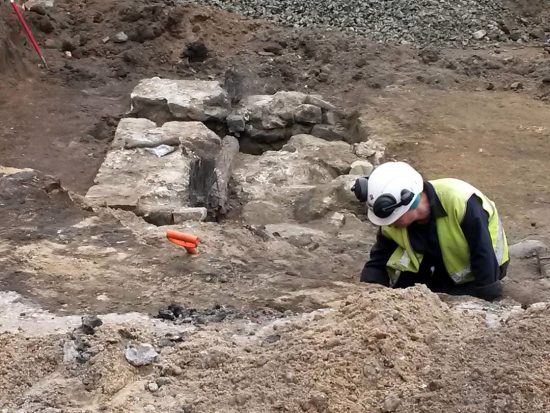 A stone and wooden structure has all been discovered but to date its purpose is uncertain. (All Photographs by John Hampton)

5 Responses to In Pictures: More history discovered in Edinburgh as Trams to Newhaven project continues