Posted on Thursday 3 September 2020 by Gareth Prior

Its another new location for this latest “Lockdown Walk” (yes, we know we’re not really in full lockdown anymore but the series name will remain for now!) as we head to Sheffield and the Supertram system for a view of one of the original Siemens Duewag built trams.

The 25 strong class of trams were built in Dusseldorf between 1992 and 1994 and after some were tested on the Rheinbahn network in the German city they were gradually delivered to Sheffield ready for the opening of the network. This example – 112 – arrived on 13th January 1994, the first of the trams to arrive in that year (the first 11 had arrived in 1993). Having gone through several different liveries the tram is now in the standard Stagecoach Supertram livery of blue, red and orange. 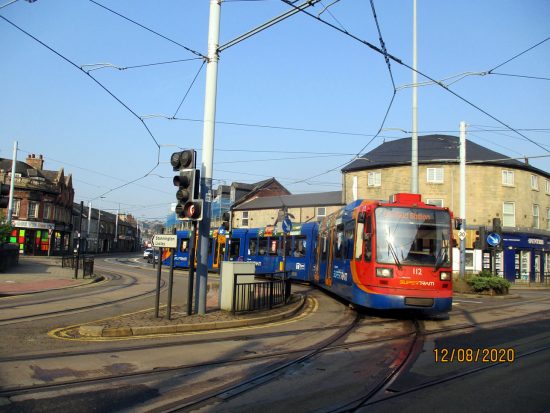 In this photo we see 112 coming off the Malin Bridge branch at Hillsborough with a service which will terminate at Sheffield Station. The short-running is down to rail replacement works on the Blue route which was seeing all Blue route trams only able to run between Malin Bridge and Sheffield Station. The line to and from Middlewood can be seen to the right of the tram. (Photograph by Stuart Cooke, 12th August 2020)