We take another trip to Beamish for this edition of a tram and something else!

The Great North Steam Fair, usually held annually at Beamish, is the perfect opportunity to see a tram alongside other forms of transport with many different types of vehicle in operation around the site during the four day spectacular and the 2019 event was no different with this 12th April 2019 image showing resident tram Newcastle 114 on the raised section of line between the Town and Pockerley.

It is joined by steam powered Yorkshire Wagon no. 117, in the colours of the Denby Steam Cartage Co., which is powering around the museum road system giving us all the opportunity to capture timeless scenes such as this! 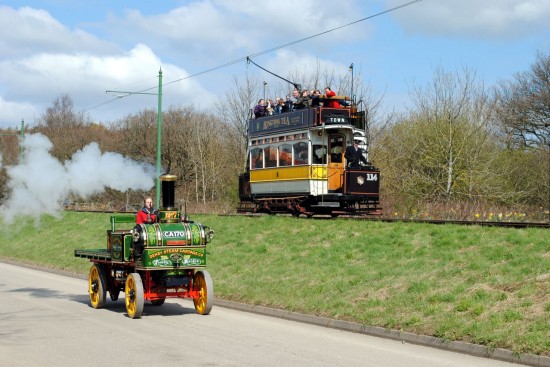 This entry was posted in Beamish Tramway, Trams &. Bookmark the permalink.