Whatever Happened To? Blackpool Balloon 707

Posted on Saturday 13 June 2020 by Gareth Prior

11 Balloon Cars operated over the last two days of the traditional Blackpool Tramway, the largest number of trams from a single class but the lowest numbered of these was actually 707 which is the first we feature in this continuing series.

707 was another of the trams we have featured in this series that operated on both days of the weekend and as with many of the double-deckers it was seen in action on the evening service with the daytime service almost exclusively in the wheels of single-deckers (save for one). On the last day, 707 would end up being the very last tram to return to depot at the end of the traditional tramway with it heading across the Prom and along Lytham Road, Hopton Road and into depot at around midnight.

With 707 having been one of the Balloon Cars selected for conversion to a “B fleet” car with widened centre entrances it was, of course, retained by Blackpool Transport but after limited usage for this purpose it was side-lined until it was decided to resurrect it for heritage service which saw a repaint into green and cream. After issues preventing its use it was finally able to enter service on 14th March 2020 – just before heritage tram operations were suspended as a result of the Coronavirus pandemic. 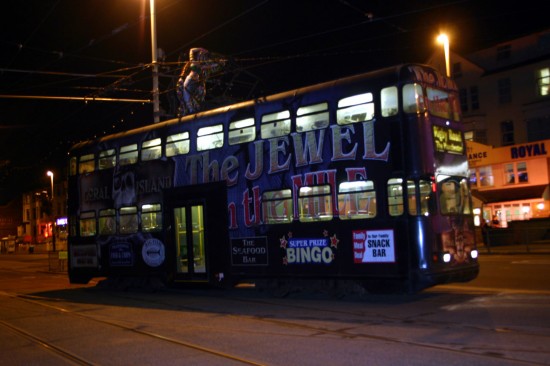 The last tram to head back to depot on the traditional Blackpool Tramway before closure for final upgrading was Balloon 707. At 2358 on 6th November 2011 we see the tram about to cross the traffic on the Prom. (Photograph by Gareth Prior) 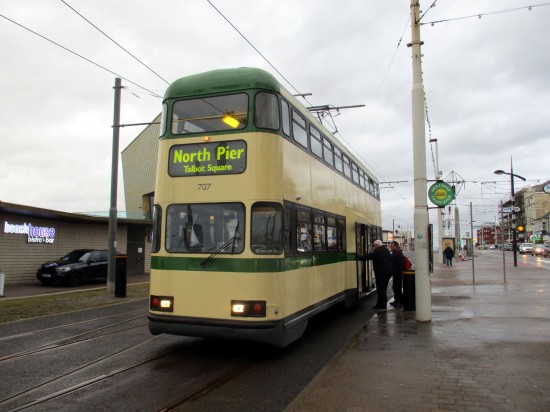 14th March 2020 and 707 back in service and back in green and cream at North Pier and Tower heritage stop. This was the tram’s first day in passenger service after reactivation and repaint, and at the time of writing its last too. (Photograph by Rob Bray)