Whatever Happened To? Blackpool Centenary 648

Posted on Monday 1 June 2020 by Gareth Prior

We reach the end of the list of Centenary Cars which ran on the last weekend of the traditional Blackpool Tramway today – 648.

648 would run on both days of the final weekend with Saturday 5th November 2011 seeing the tram run on the daytime Pleasure Beach to Little Bispham service as well as being out in the evening with the final day, Sunday 6th November, seeing the tram operate during the day on the Pleasure Beach to Little Bispham service. It would return to depot at approximately 1745 on that last day but that wouldn’t be the last we saw of the tram, far from it!

Originally, destined for preservation by the National Tramway Museum, space constraints meant that this plan didn’t come to fruition but fortunately it was retained to become part of the Heritage Tram Tours offering. Its last overhaul had been done in a sympathetic way to its original style and so it was possible to restore it to a condition resembling the traditional Centenary Car in the early days of the heritage offering with it returning to action in 2013 in a coat of green and cream and it remains part of the heritage fleet to this day. 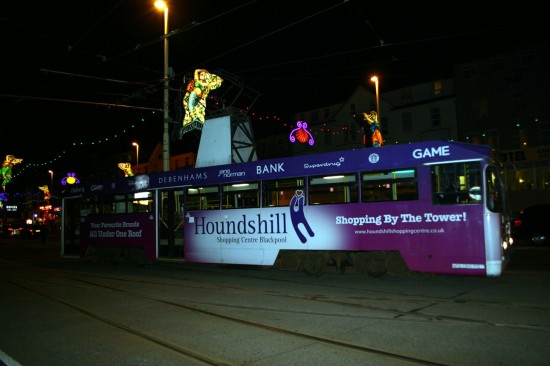 In an advert for the Houndshill Shopping Centre, Centenary 648 is just starting its final trip across the Prom road and to Rigby Road Depot on the traditional tramway on 6th November 2011. 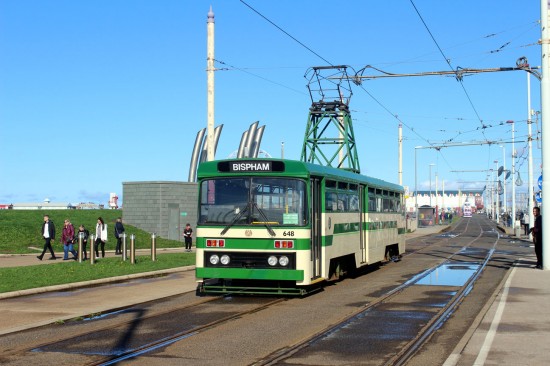 On 28th September 2019 and 648 is back in green and cream and is also back at Manchester Square in this view as it heads north towards Bispham. In the distance can just about be made out Balloon 713 – in an advert for the Houndshill as was 648 in the earlier picture. (Both Photographs by Gareth Prior)