Another trip to Beamish for an image taken of the trams there in 1996 today. In this edition we again take a peek inside the depot.

This time the trams we see sitting in the depot are two trams with a Sheffield connection: Sheffield 513 and Newcastle 114. We have featured 114 several times over the past few weeks so there isn’t much more to say about the tram, except to say that by this time it had only been back in service for three months following its extensive restoration.

As for 513, this tram was built in the period 1950-1952 by Charles Roberts of Wakefield and as a result the class became known as the Roberts cars. Its original operating career was painfully short as the tramway in Sheffield was closed on 8th October 1960 and 513 was one of the trams specially decorated with a “Last Tram” livery (510 was the other which retains this special livery at Crich). Unlike other trams 513 didn’t end up as a shed but was purchased by a private individual and eventually made it to Beamish in 1976. Restoration followed and the tram entered service in 1983 before the following year it headed to Blackpool. After just over a year it was back at Beamish where it operated successfully before it was back across to Blackpool for another period of loan operation and in 2011 it headed to the East Anglia Transport Museum where it remains to this day. 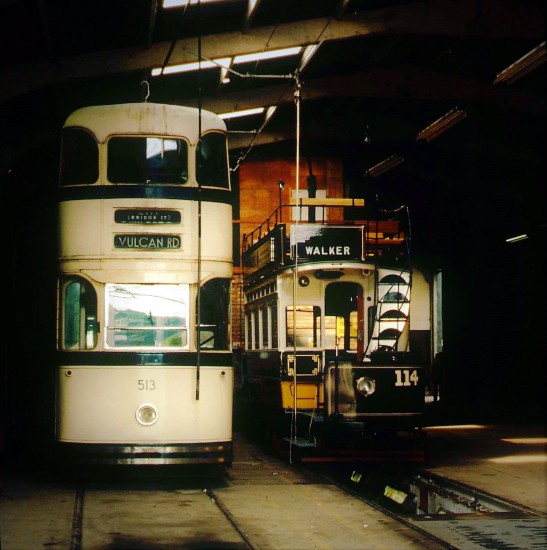