Posted on Tuesday 19 January 2021 by Gareth Prior

Today we go back to our very occasional series of “Lost Trams”, and in the case of this tram it truly does seem to be lost in the middle of the woods in Romsley Hill, Worcestershire! It is a Dudley & Stourbridge single-decker dating from 1898/9 which would have last run in 1930 at the latest.

This tram was discovered when the Black Country Living Museum were looking for potential exhibits for their museum but was kept in situ as better examples were discovered and far forward to 2020 and it remains in place – with nature trying to reclaim the wood for itself again!

It is believed to be a Brush single-decker originally built for the Dudley, Stourbridge & District tramway in 1898/9 with a Peckham truck. 18 similar trams were built with the first nine being motors from the off and the remaining cars started off as trailers but were quickly converted into motors as well (within three years). They were fairly small cars with seating for just 28 passengers and featured open vestibules. Some examples were withdrawn within about 15 years whilst others continued in service. The livery of the trams at first was orange and grey/white (which sounds a very interesting combination!)

It is not known which number this tram is (was?) but it was clearly sold on for further use and despite the fact it is no deep in the dark wood its origins can still clearly be seen. 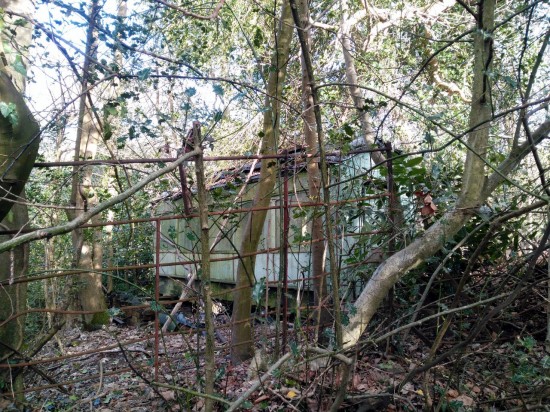 Look in the middle of the trees and beyond the fence you can see the remains of the 1898/9 Dudley, Stourbridge & District tram. (Photograph by Andy Rutter, 12th February 2020)