Posted on Wednesday 11 March 2020 by Gareth Prior

Since we ran the report last week on the planned celebrations for Lanarkshire 53’s 25th anniversary since restoration at Summerlee we have received more information on what is planned – including a re-enactment of its launch on the actual anniversary of it taking place.

The celebrations will start at 11am on 1st April when there will be a re-enactment of the ribbon cutting ceremony by Baroness Liddell of Coatdyke. The press will be invited to this event to give some extra publicity to both the museum and the Summerlee Transport Group, who are still in the process of restoring Glasgow 1245 to operational condition for use on the museum tramway. As long as the weather allows 53 will then operate in service on Wednesday 1st April. This day marks the exact anniversary of the launch of the tram into service back in 1995.

As we reported before Lanarkshire 53 is then due to run on both Saturday 4th and Sunday 5th April, subject to weather conditions. There be souvenir tickets issued to all fare paying passengers on both days and members of the Summerlee Transport Group will also be on hand to talk about the tram and work of the group. 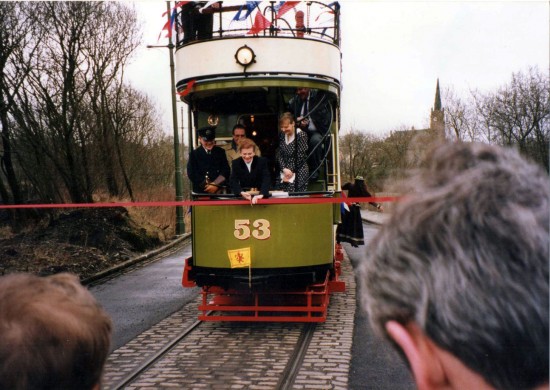 The original ribbon cutting ceremony on 53 back on 1st April 1995. The ribbon is being cut by Helen Liddell MP with Bob Sutherland looking on. (Photograph courtesy of Summerlee Transport Group) 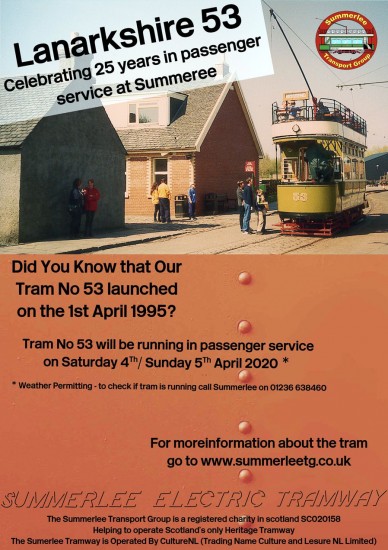