It seems to be catching – after West Midlands Metro’s “early” opening of the Birmingham Westside extension earlier this month, Manchester Metrolink have now announced their planned early opening of the Trafford Park line. According to an event held on the line, and attended by Mayor Andy Burnham, it is planned to open the line in April (subject to the usual testing being a success), which it says is seven months early.

M5000 3105 was used for the special press event with the tram pictured at Parkway stop with the special destination “Trafford Park Line Coming Soon”. During the event it was confirmed that they plan to start services in April – subject to successful testing and driver training, which is expected to start in early 2020.

At this stage it is not known what service will run on the line as the final plan is that a 12 minute service runs to Crumpsall on the Bury line. However, with the delay in delivery of the 27 new trams on order it remains to be seen whether this service level can be maintained and it could be a shortened service, thus requiring fewer trams to operate it, is introduced to start with. But only time will tell.

Speaking at the event Andy Burnham said: “With Metrolink we are once again able to demonstrate a track record of delivering major schemes on budget and ahead of schedule. TPL (Trafford Park line) was the first project to benefit from the devolution deal and is a shining example of what we can achieve with the right powers and funding. There is no doubt it is a blueprint for how Greater Manchester could run other transport systems in the future and represents a key step forward on our journey towards a more integrated, London-style transport system.”

Maybe I’m just cynical about claims of early openings and it really is going to be seven months early! For a long time it has been expected that the line would open in the first half of 2020 but looking back to the confirmation story of its go-ahead (in October 2016) it did say that it would open by 2020/21, so you could say that they may have a point about it being ready early, I guess its just a case of perspective!

Whether its early or not, one thing is for sure it will be another popular addition to the Manchester Metrolink network when it does open to the public. 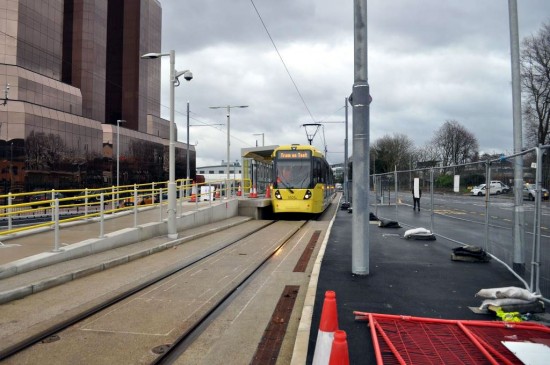 This photograph taken at IWMN (Imperial War Museum North stop on Trafford Wharf Road shows 3105 arriving at the stop from Pomona on the way to a press release event at the Trafford Centre. 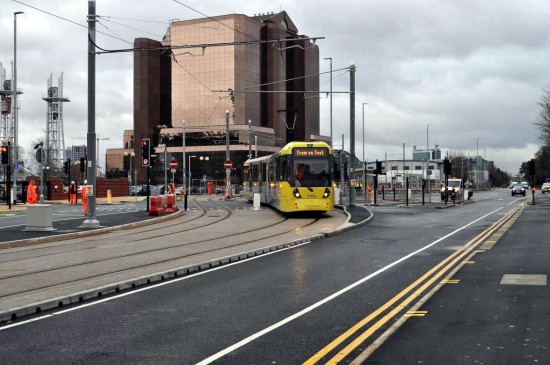 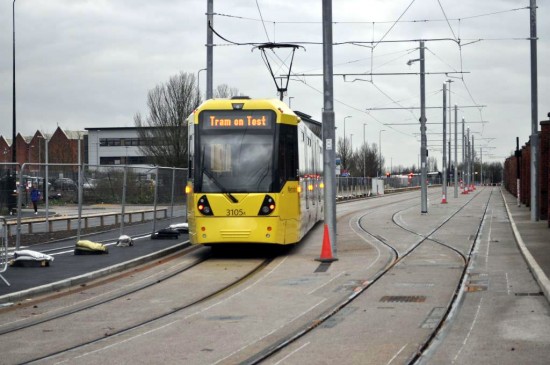 A little further west and 3105 has turned onto Warren Bruce Road and is passing the central pocket track which form the turnback facility for event traffic. 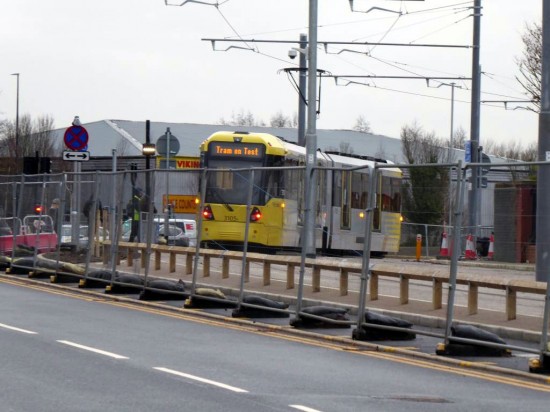 Heading away to the event at the Trafford centre we see 3105 passing through the Village Circle roundabout before entering the roadside alignment on Village Way. (All Photographs by Steve Hyde, 19th December 2019)