And still the wait goes on for the Birmingham Westside extension

We had expected to be bringing you the news this week of the official confirmation of the opening of the Birmingham Westside extension on the West Midlands Metro but at the time of writing we are still waiting! All the signs had been that with a week’s shadow running between Grand Central and Library 8th December would be the likely date but to be fair to West Midlands Metro this was never officially announced and now it would appear it will be later into December.

The last few days have seen the continuation of the shadow running with trams running without passengers onto the extension running from Grand Central, up Pinfold Street into Victoria Square where the Town Hall stop is located and then the Library terminus in Centenary Square. We also saw the other day the loaded test to make sure a tram could restart on the steep gradient leading from Pinfold Street into Victoria Square.

Some services peak time services are also still terminating short of the city centre at Bull Street instead of running along Corporation Street to Grand Central as the preparations for the opening of the line continue.

There has also been some finishing works taking place on the extension with block paving being put down at Library and also behind the stop at Town Hall.

On the tram front it has been confirmed that the two latest trams receiving batteries are 25 and 32, which leaves just 26 and 27 to be completed out of the 21 strong fleet of Urbos3 trams. A further tram was involved in a collision with a vehicle on Bilston Road in the week as well, though it isn’t known how serious the damage was.

The wait goes on but all steps are being taken by West Midlands Metro to make sure the line is fully ready for the public and it really shouldn’t be too long before it is – honest! 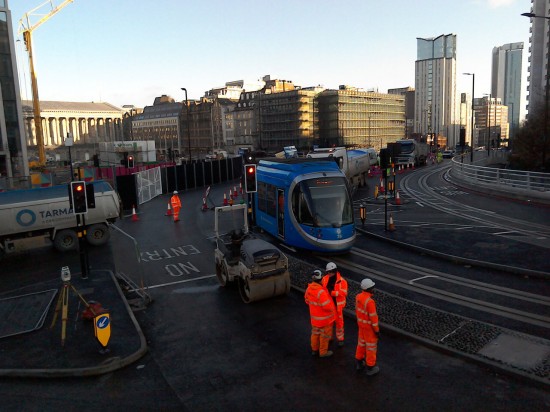 As if to prove the point out finishing works, the orange army and equipment surround 36 on Broad Street. 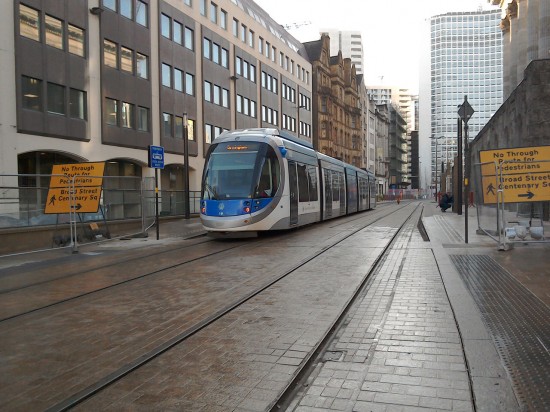 The Town Hall Stop where work was also in progress with fencing blocking the way at the time of the photo. The only tram not in the full blue livery, 19, is seen here. (Both Photographs by Ken Jones, 4th December 2019)