Posted on Thursday 14 November 2019 by Gareth Prior

The final of the five trams to run at the Glasgow Garden Festival was also the only tram which wasn’t considered as preserved and the only “foreign” tram to make an appearance – it was Blackpool Boat 606.

Up until the Garden Festival in 1988 606 was just one of the Boat Cars, plying its trade along Blackpool Prom each summer as weather allowed but then the Festival came around and it was selected to make the trip north of the border – the very first Blackpool tram to go to Scotland and to date the only Blackpool tram to have operated there (although not the only one to have gone there). To prepare it for its starring role in Glasgow 606 received a repaint unlike anything it had seen before as gone were the cream and green colours it was used to and it was hello to a bright blue and yellow livery! With adverts for Belhaven Beers added 606 proved to a popular addition to the operating trams – when hasn’t a Boat been popular in nice weather! With its use at the Festival over 606 would return to Blackpool but would keep its colourful livery with it reversed in 1998 with the main body yellow. 606’s travelling days were not over either as in 2000 it became the other tram in the swap with Standard 147 when it headed to the USA and can now be seen at the National Capitol Trolley Museum.

This view shows 606 along the Clyde with its smartly dressed crew waiting for passengers and a trip along the bank. 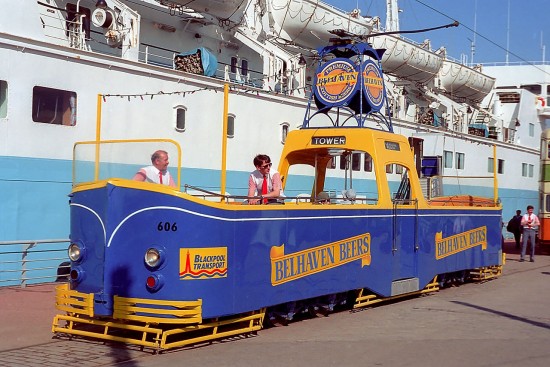