Posted on Thursday 7 November 2019 by Gareth Prior

Today we continue our look at the trams which ran during the Glasgow Garden Festival. This time around it is Edinburgh 35 which was operating in its third town/city at the time having previously run on its home system and in Blackpool.

Edinburgh 35 only operated for eight years in its home city having been introduced into service in 1948 and being withdrawn at the end of the traditional tramway system in 1956. It was preserved by the city and was put on display in a transport museum located at the old Shrubhill Works. This museum was closed in 1979 and after a period in store away from the public eye it was off to Blackpool where it was to become one of the visiting trams for the 1985 Centenary. It was then chosen as a tram to perform at the Glasgow Garden Festival and would operate almost 4,000 miles during 1988 whilst back in Scotland. At the time ownership of the tram remained with Edinburgh City Council but with nowhere to display the tram it was sent down to Crich on long-term loan. It ran briefly in 1989 but only on non-passenger duties as there are concerns over its electrical wiring which has seen the tram remain a static exhibit for the past 30 years. June 2008 saw 35’s ownership transferred to the Tramway Museum Society and then in 2013 it enjoyed some cosmetic workshop attention before it was moved into the new display in the Great Exhibition Hall.

In this photo taken at the Garden Festival we see 35 running along the banks of the Clyde. 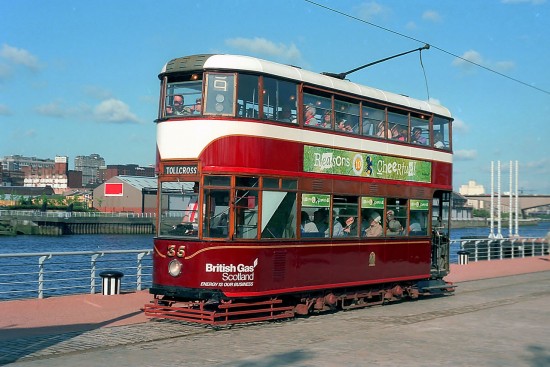 4 Responses to Picture in Time: Edinburgh 35