Posted on Tuesday 29 October 2019 by Gareth Prior

It’s Tuesday which can only mean one thing – we are off to Blackpool for another look at a photo from the archives. We start off a selection of photos taken in 2007 with a look at Blackpool Balloon 712.

In the below photo we see 712 at Cleveleys on 7th August 2007 working a service all the way from Fleetwood to Starr Gate. With a pretty full load on board already there is a queue of hopeful passengers in the shelter but it doesn’t look as if many of them will be lucky enough to head back into Blackpool just yet. At this time 712 was carrying the 1950s version of the Green and Cream fleet livery which had been applied three years earlier in 2004 as one of several Balloons to receive retro fleet livery in time for the 70th anniversary events of the streamlined trams. 2007 would be the last year this tram would be seen running in this livery without adverts as by 2008 it had side between deck adverts applied. Running for the last time in 2009 the tram was withdrawn at the end of that season before it was repainted into the original Green and Cream livery ahead of moving into preservation at the Crich Tramway Village where it was to be one of the exhibits in the newly organised Great Exhibition Hall – and that is where it remains today. 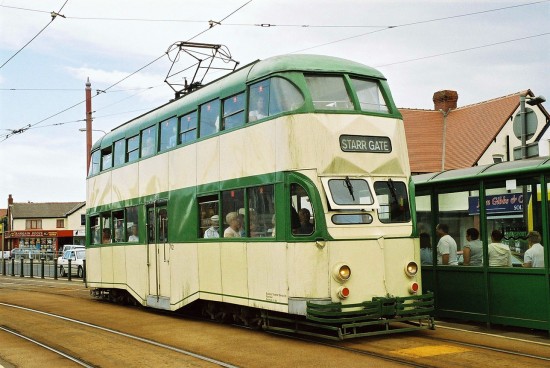