Around the World in Trams: Milan 1821

Posted on Sunday 20 October 2019 by Gareth Prior

After a few weeks of random tram images we settle in Milan for the next few weeks as we continue our series on trams from outside of the British Isles.

Trams have been running in Milan since 1881 when the first horse tram routes ran in the city with electric trams starting to run 12 years later in 1893 and they have continued to run throughout until today. The network is now 113 miles (181.8km) and runs on the Italian gauge of 4ft 8 7/8in. It is operated by Azienda Transporti Milano (ATM).

In this photo we see Peter Witt no. 1821 in front of Milan Central Station. This station has 24 platforms and is allegedly the largest station in Europe. 500 similar trams were built in 1929-30 with six different manufacturers employed with this particular version built by Officine Meccaniche. 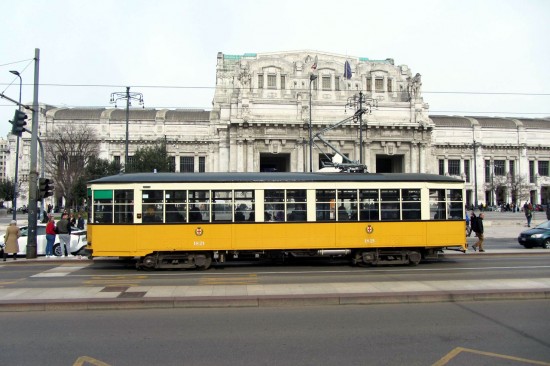