Posted on Sunday 13 October 2019 by Gareth Prior

In all the excitement of the event at Crich, Blackpool and Birkenhead we have neglected to mention the Trolleybus Weekend at the East Anglia Transport Museum which took place over the weekend of 21st and 22nd September. Whilst primarily an opportunity for the museum to get out all of their operating trolleybuses the other forms of transport at the museum also get a look in – of course, including the trams.

One of the features of this event is the chance to see the trams running after dark and on the evening of Saturday 21st September the two Blackpool trams at the museum – Marton VAMBAC 11 and Standard 159 – were in action as seen in the below photo.

The East Anglia Transport Museum is starting to come to the end of another successful operating season and will be open on Sunday 20th October and Saturday 26th October (the latter will be their Halloween event which will again include late night opening until 2100). After that the museum will only be open for the Santa Tram for pre-booked ticket holders only. 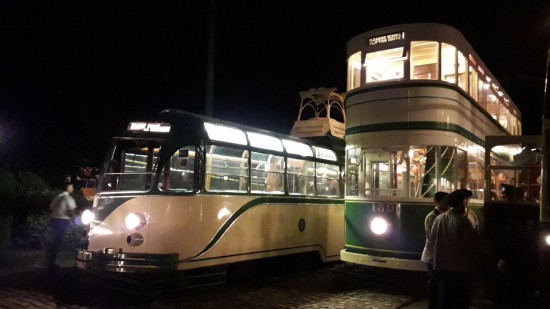 In this view we see 11 and 159 standing at the Chapel Road terminus waiting their next opportunity to head off into the woods. (Photograph by Matthew Holland, 21st September 2019)