In Pictures: Sunderland 16 in action at Beamish

Posted on Monday 7 October 2019 by Gareth Prior

Now we are firmly in the autumn season it is a bit of the calm before the storm for many heritage tramways with schools firmly back and before the busy October Half Term period and then Christmas – a period when places such as Beamish really come alive once more. With the quieter period at Beamish the number of trams in service during the week is lower with normally just a two tram service sufficing, one such day was Thursday 3rd October when Sunderland 16 (clockwise) and Blackpool 31 (anti clockwise) were operating as seen in the below photo from Trevor Hall. 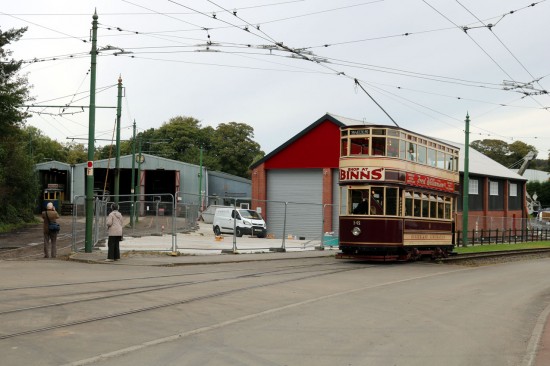 Sunderland 16 is running the clockwise circuit when it is seen passing the new bus garage. Recent progress on this building has seen shutters fitted at both ends although there still remains fitting out to be completed before it can open. (Photograph by Trevor Hall, 3rd October 2019)