Posted on Sunday 6 October 2019 by Gareth Prior

The uninspiring advert designs on Manchester Metrolink continue – 3061 has received an ad for Babyliss with a grey/white base colour, not too dissimilar to the standard Metrolink colours! The advert was first noted in service in late September and features full contravision on most windows along with the slogan “A new era in hairstyling” (pity that doesn’t extend to an inspiring all over advert!) and some models looking very pleased with their hair no doubt helped by those Babyliss hair care products! An added issue with the advert is that standard white fleet numbers feature on the side of the tram meaning the “61″ gets rather lost within the advert. 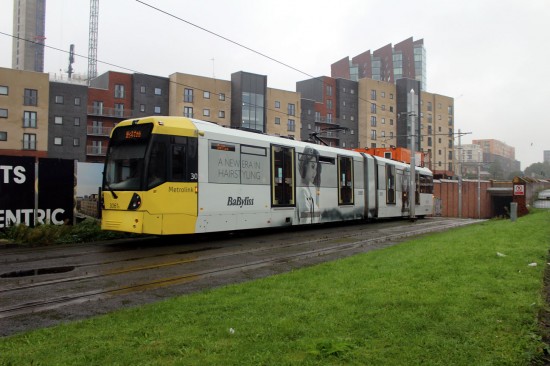 The Babyliss advert is seen here on 3061 as it heads passed the Sheffield Street turnback on its way to Ashton-under-Lyne. (Photograph by Gareth Prior, 4th October 2019)