In Pictures: 33 goes blue and enters service – but still not the end of magenta

Posted on Tuesday 1 October 2019 by Gareth Prior

Sometimes we just get a bit carried away with the excitement of new liveries and forget about a tram which hasn’t been seen in action for a while. And that is precisely what has happened on the West Midlands Metro as our report last week that just 33 remained in magenta was actually wrong – 22 also retains the old livery, although it hasn’t been seen in service since 2nd September, and is now seemingly being prepared for the fitting of batteries. And in the meantime, 33 – which was still in magenta last week – has now received the full blue livery vinyls and has also entered service for the first with batteries.

After being started on 22 was seen in the depot yard late last week with the first signs of battery fitment but has since been moved into the workshops where the work will be able to continue.

As for 33, after last week’s report that it remained in the old livery style it was then the next tram to receive the blue vinyls, again being spotted around the depot in late September in this condition. It was then passed fit for service and would carry its first fare paying passengers on Tuesday 1st October 2019. In doing so it became the 14th battery fitted tram to run – two thirds of the total Urbos3 fleet.

So, with all the confusion – well we’re confused anyway! – just what is the situation with the liveries and battery fitment?

Being currently fitted with batteries: 22

That is the current situation but it is an everchanging situation with all of the trams due to receive batteries (if they don’t they won’t be able to run on the extension to Centenary Square as it has now wires!) in the coming months.

22 sits in the depot yard at the start of its battery fitment. 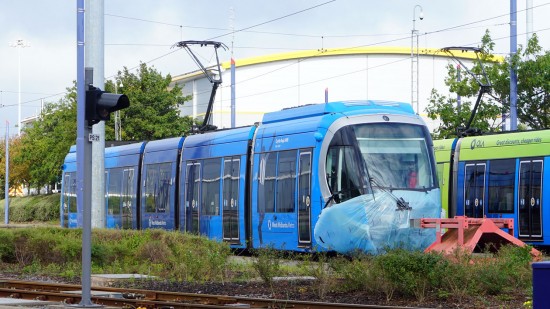 31 continues to be stored in the depot yard awaiting a decision on how best to complete repairs. 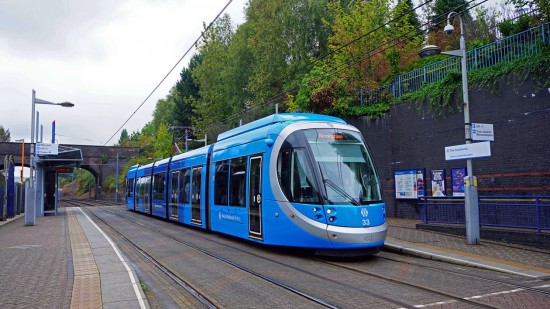 First day back in use for 33 was Tuesday 1st October. We catch-up with the tram at The Hawthorns. (All Photographs by Andy Walters)