In Pictures: 25 leaves just 33 in magenta on West Midlands Metro

There are now no trams available for service on the West Midlands Metro featuring magenta in their livery with 25 the latest to receive the full blue vinyls – complete with adverts for OLA. The tram first ran in service on Monday 23rd September as a peak extra before it was then allocated to service the following day.

In receiving the blue livery becomes the 16th tram to carry the full new look livery and the fourth with adverts for OLA. The only tram which now retains the old Network West Midlands silver and magenta colour scheme is 33 which remains in Wednesbury Depot where batteries have been fitted although at the time of writing it has not yet been commissioned for service. Whether it receives the blue vinyls before this happens remains to be seen. 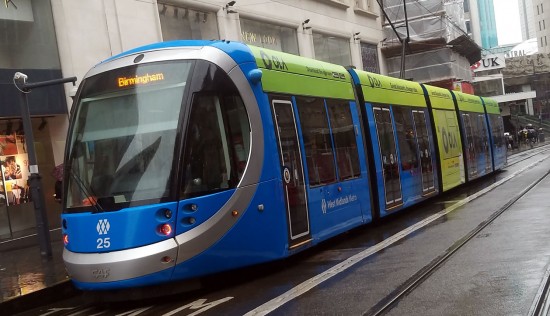 25 calls at Corporation Street shortly before terminating around the corner at Grand Central. (Photograph by Mark Cufflin, 23rd September 2019)

Its first full day in service was the following day – 24th September – and we see the tram at Wednesbury Great Western Street heading for Wolverhampton St George’s. (Photograph by Andy Walters, 24th September 2019)