Posted on Tuesday 10 September 2019 by Gareth Prior

Track has been a key word in Sheffield this summer with the rail replacement work around Hillsborough having now finished having taken place for several months whilst elsewhere various old tram track – from the first generation tramway – has been discovered as a result of other roadworks. The latest old tram track to be uncovered has been on Bridge Street – track which last saw trams run across it in 1960.

This track was not actually on any tram route with its main function being to get trams to and from Tenter Street Depot and as a turning loop for trams which terminated in the city centre. Football specials to Hillsborough also used Bridge Street to load and unload passengers. The track was still used right up until the final day in October 1960 with many tram tours using it as they started on Angel Street, indeed on 2nd October 1960 one of the surviving Roberts cars (510 or 513) derailed as it climbed Bridge Street into Sing Hill. 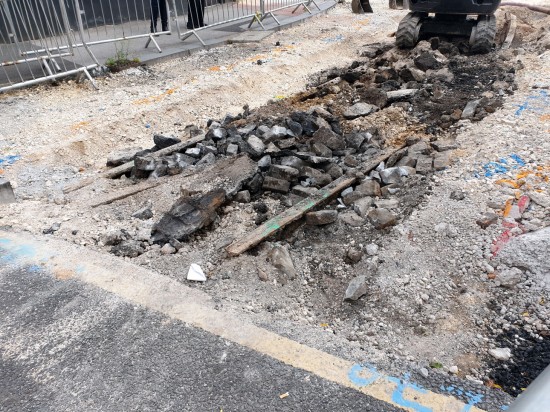 Found again after 59 years! The track in Bridge Street is seen here amongst the rubble of the old road surface. (Photograph by Ryan Hartley, 29th August 2019)