We featured a non-Blackpool tram in Blackpool for our Blackpool edition of Picture in Time this week and for our traditional tram series we feature a Blackpool tram not in Blackpool! This tram is Blackpool Marton VAMBAC 11, a tram very much associated with the East Anglia Transport Museum.

11 was one of 12 trams built by English Electric in 1939 which was converted into a Marton VAMBAC in 1952, utilising the revolutionary VAMBAC equipment to run on the Marton route – which funnily enough is why the class was known as a Marton VAMBAC! The tram was to remain in service until 1962 when it was one of the last of the class to be taken out of service when its route was abandoned and it would become the only of the trams to be preserved. Having initially moved to Hayling Island in 1965 it was soon to end up at Carlton Colville arriving there in 1969 and save for a short period in 2011 when it was loaned to Beamish it has remained in East Anglia ever since.

This image was taken on a hot summer’s day in 1981 with both driver’s windscreens open to cool the driver. It also features the photographers twin sons aged 5. We are sure they will be delighted to see this image published for all to see on the internet! 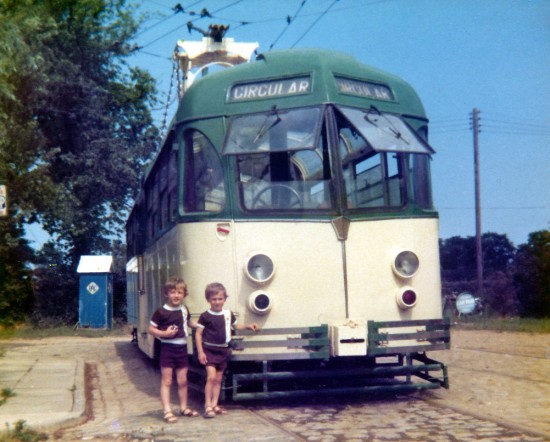