Birmingham Westside works continues towards an opening this year

Posted on Monday 5 August 2019 by Gareth Prior

Various high-level local politicians and members of the Midland Metro project team have been in Birmingham City Centre this week inspecting the latest progress on the Birmingham Westside extension from Grand Central to Centenary Square. The work is now said to be entering the “final stages” ahead of testing and opening by the end of 2019 with work recently concentrating on the two new tramstops as part of this first phase of the extension.

Mayor of the West Midlands, Andy Street joined Waseem Zaffar, Birmingham City Council Cabinet Member for Transport and Environment, Phil Hewitt, Director of West Midlands Metro and Maria Ion, Project Lead at the Midland Metro Alliance to look at the most recent progress on the extension which has seen work start on the first of the tramstops.

As well as the work on the tramstops there is still track laying underway with most track now down although there do remain small sections still to be completed. This first part of the extension has the advantage that no overhead needs to be installed as it will be the first section of the route to be built without wires with the trams running under battery power.

Andy Street commented: “The expansion of the Metro to Centenary Square will make it easier for those living, working and travelling in Birmingham to get around the city and beyond. With tram stop furniture being installed, it is very clear that we are entering the final stages of construction for this first phase of the route, and it is exciting to imagine that local people will be using these tram stops later this year. But of course, this is only the start of our Metro expansion, with work ongoing to get trams out to Five Ways as part of this same route, and plans in place to extend the line from Wednesbury to Brierley Hill. These expansions combined with major investment in state-of-the-art clean buses and an improved train timetable is clear evidence to show how our region is undergoing a major transport overhaul.”

It is planned that services will start from Grand Central to Victoria Square and Centenary Square by the end of 2019 although no exact date has been announced as yet. A recent document released by the West Midlands Combined Authority has, however, given more of a timeline of when things are expected to start to get going on the extension. The report says that everything is on track – although does admit some delays were experienced due to an issue with the diversion of the Engie district heating main – with the aim being that the first tests will commence in August 2019 (which does seem pretty ambitious considering there remains track to be laid at the time of writing). This testing will be extended in scope and complexity between August and November ahead of driver training starting in mid-November. It remains to be seen whether this timetable can be kept to.

Although the issue with the diversion of the Engie district heating main has now been sorted in practical terms agreement does still need to be reached on the allocation of costs between Engie, Birmingham City Council and Transport for West Midlands.

Elsewhere in the report it says that 19 of the 21 Urbos3 trams will have had work commenced to fit them with batteries by the time the extension opens. This is the first time it has been mentioned that not all trams will be ready and will restrict those trams which can be used in service on the new route. Apparently CAF remain committed to completing the full programme of works by the end of 2019 and are continually looking for alternative working arrangements that will reduce the durations and bring forward completion of the programme. As things stand at the moment 20 and 30 remain under attention with the former likely to be the first seen back in service.

Talking about trams further details have been released on the procurement of extra trams – described as Third generation trams with “up to” 50 trams needed to operate on the much extended network by 2026. This includes six needed for the Edgbaston line in 2021, 15 for the Wednesbury-Brierley Hill line in 2023, four for Birmingham Eastside in 2025 and 23 for East Birmingham to Solihill in 2026.

Four suppliers are currently preparing their final bids to supply these trams, namely Alstom, Bombardier, CAF SA (suppliers of the Urbos3 trams of course) and Skoda. All bids were due to be received by 1st July with TfWM taking July to consider the bids and contracts to be signed by 4th October 2019. The first tram should be delivered on 30th July 2021. The winning bidder must be able to supply trams with batteries fitted because of the number of sections of line due to be operated without overhead.

Back to the immediate future and work will continue over the next few months on the construction of the Birmingham Westside extension with services starting before 2019 is over to Centenary Square. 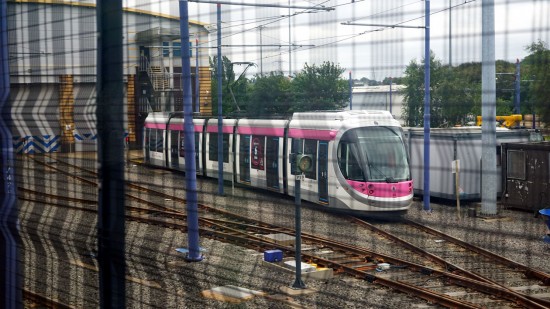 The latest battery fitted tram waiting to enter service in 20. We see it at the depot through the fence. (Photograph by Andy Walters, 31st July 2019)