In Pictures: Bolton 66 returns to service – and then to depot

One of the bigger complaints in the tram output in Blackpool so far in 2019 has been the lack of variety with only Box 40 (now departed) and Standard 147 flying the flag for the pre-1933 era. But all that should be about to change with the overhaul work on Bolton 66 now having been completed and the tram available for service once more.

Visitors who took part in the tours of Rigby Road Depot during the recent Totally Models event would have seen 66 in the Fitting Shop where it was approaching the end of its overhaul which had seen significant attention to its bogies as well as a touch-up of its paintwork. Not long after this 66 was released for testing and its first noted appearance on the Prom was Friday 28th June when it undertook a few test runs. With these test apparently successful 66 was then made available for a special tour on behalf of the Bolton Tramcar Trust which ran on Thursday 4th July, including a trip through to Fleetwood.

66 first public use then followed on Saturday 6th July when it operated as a third tram on the two tram Promenade heritage service with a spare crew off a private hire. However, not all went to plan as it suffered from some teething problems with a hot axlebox identified causing it to be terminated at North Pier and returned to depot under its own power during the afternoon of another sunny day in Blackpool. With a length absence and a return to service after significant attention it is to be expected that there will be few teething problems and hopefully it won’t be too long until we 66 back on the Prom once more. But for now it is good to see the work on 66 complete and it cleared for service once more. 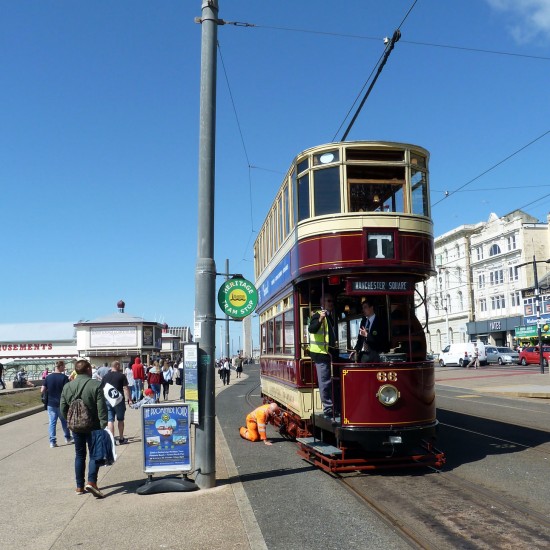 Bolton 66 pauses in the loop at North Pier/Tower with a fitter taking a look at its hot axlebox. With a fix not possible on site 66 returned to Rigby Road Depot under its own power and is seen here with its destination blind amended to Manchester Square. (Photograph by Peter Dockerty)

12 Responses to In Pictures: Bolton 66 returns to service – and then to depot