Posted on Thursday 27 June 2019 by Gareth Prior

In this week’s traditional tram Picture in Time we are once again at Crich as we take a look at an ever popular open topper, it is London County Council 106.

106 was built in 1903 and is a London County Council “B” class tram which was constructed by Dick Kerr as a double deck open topper. Although the tram did undergo a number of modifications over the years – including becoming an enclosed tramcar, excluding the open driver platforms. Upon withdrawal as a passenger car in 1925, 106 was converted to a snow plough which saw the top deck removed and it renumbered 022. With the tram surviving until the end of tramway operation in the capital it was saved for preservation by the London Transport Executive and restoration got underway in 1971 with the work to return it to a fully functioning double decker was completed in 1983. It moved to Crich and entered service that year and it is just one year later in 1984 that we see it at Stephenson Place.

Despite spending some time out of service in the intervening period it is now back as part of the operational fleet having returned to action in 2015. 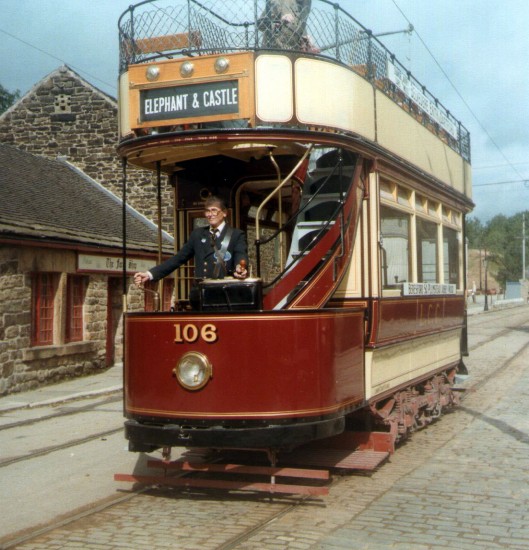