Completing our little look at the last year of the traditional tramway in Blackpool, today we view two of the Brush Cars which ran that year, both of which were in advertising liveries.

The below photograph shows 630 and 631 at North Pier working in opposite directions. On the left is 630 which was in its second advert for Karting 2000, a company which had been evicted from its original home at Starr Gate thanks to the tramway upgrade but by 2011 had been rehomed adjacent to South Pier. It is joined in this image by 631 which was in a long-standing advert for Walls Ice Cream. Both trams are running on the Pleasure Beach to Little Bispham service, which was, of course, the entire length of the tramway in 2011.

Both of these trams survive today and are operational (albeit looking different with the return of green and cream fleet colours) – 630 at Crich whilst 631 has remained in Blackpool throughout. 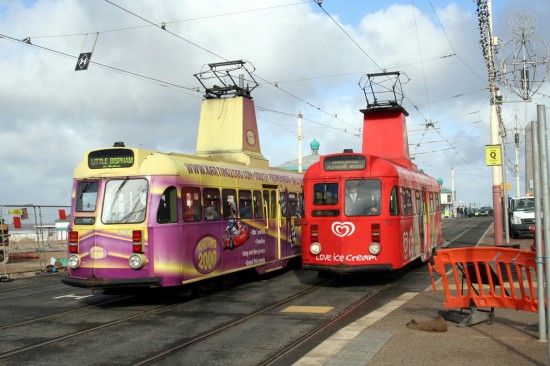