In Pictures: Latest developments at Beamish

The trams at Beamish have been in the news plenty of late, even those trams not operational have been moved around the depot and Oporto Coal tram 65 has once again been on the move. This time it has been moved over the pit on road 3 of the depot where various parts are being removed from the tram. Meanwhile, the operational trams continue to earn their keep by transporting the many visitors around the museum site.

Indeed, on Tuesday 14th May it was a warm and sunny day which made it an ideal day for open top trams to be used, and that is exactly what happened! Both Blackpool 31 and Newcastle 114 were operating on the clockwise circuit with the third tram in use (running anti-clockwise) being Oporto 196. Blackpool & Fleetwood 40 was also basking in the sun being stabled just outside the depot building.

And with Oporto 65 moved off road 4 it also allowed for better views of horse car Newcastle & Gosforth 49 and Gateshead 52. 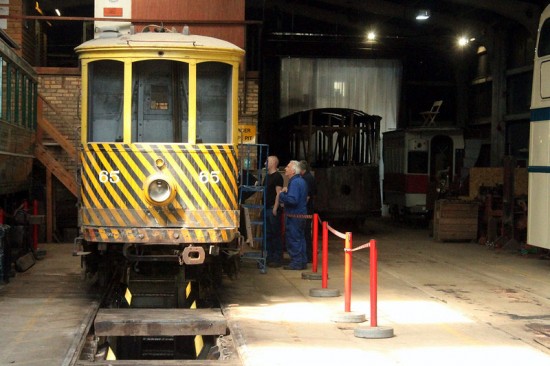 It’s difficult to know where to look in this photo as there is plenty of exciting trams visible. Oporto 65 is over the pit on road 3 with the tram attending to it discussing their next steps whilst in the background we see two more stored trams. The derelict tram in the centre is Gateshead 52 whilst on the far side we see horse car Newcastle and Gosforth 49. All three of these trams should see use at Beamish in the long-term but there are other more pressing projects to complete first. 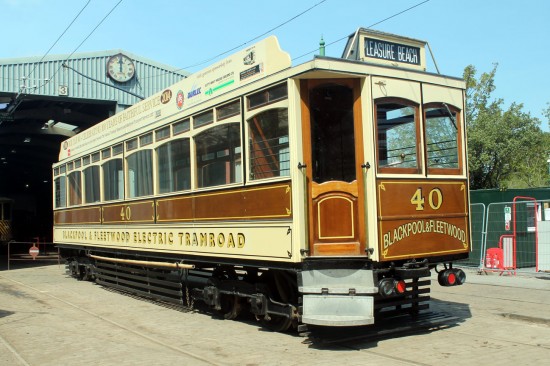 The lovely sight of Blackpool & Fleetwood 40 in the sun outside the depot. (Both Photographs by Trevor Hall, 14th May 2019)