Thursday 9th May was another day that the Tyne and Wear Metro would probably rather forget with train availability causing a basic service having to run during peak periods with none of the peak extras operating. This affected services in both the morning and evening peaks.

Between 0700 and 0900 in the morning and from 1600 to 1800 during the evening peak periods extra trains are supposed to run on the main central parts of the network supplementing the standard 12 minute frequency. These services are just listed on the public timetables as “check the electronic display for additional trains at peak times” so with this in mind perhaps it could be considered a benefit when they do run!

It is thought that 27 train sets (with each set running as a double) are needed for the Monday-Friday off peak service (so 54 trains) with 39 for the morning peak (78 units) and 38 for the evening peak (76 units). However, on 9th May it would appear train availability was at a very low level as it wasn’t possible to run any of the peak extras – which would suggest that if their reason for not running services was correct they had up to 24 trains unavailable for service (on top of usual sets out of use for standard maintenance).

In the end 28 sets were provided for service during the evening peak but this was soon down to 27 as 4071+4012 were declared a failure at Pelaw and returned to South Gosforth Depot out of service.

The one advantage of these train availability problems – and this will probably be lost of the vast majority of travellers on the Metro! – is that an unrefurbished pair of trains were scheduled to the Airport to South Hylton service; the one available unrefurbished pair is usually only used on the peak time extras.

Friday 10th May saw the majority of peak time extras running but there were still a few cancellations. 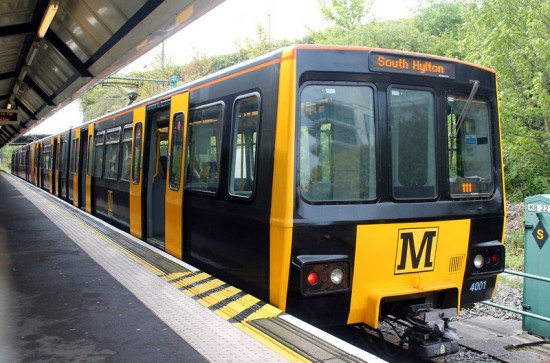 Unrefurbished pair 4001 and 4083 stand at the Airport on 9th May whilst being allocated to the main service to South Hylton via Newcastle City Centre. (Photograph by Trevor Hall)